Okunikko (literally “Deep Nikko”) is a wild landscape of mountains, rivers, lakes, and waterfalls which is famous for its scenic beauty. However, the central attraction in Okunikko is Lake Chuzenji, the biggest lake in Okunikko and a popular resort area. A cluster of hot spring spa hotels are located on the lake’s eastern shore, and this makes it a good base for exploring other nearby sightseeing spots such as the Kegon Falls, the Ryuzu Falls, the Senjogahara marshland, or Chuzenji Temple (after which the lake is named). Pleasure cruises, water sports and trout fishing are popular activities on the lake, while hiking and bird watching are popular around it. Although Lake Chuzenji is particularly popular in the autumn for its beautiful displays of fall foliage, every season has its special attractions: deep snowscapes in the winter, cherry blossoms in the spring, and in the summer it is simply a cooler, breezier location to escape the heat and humidity. 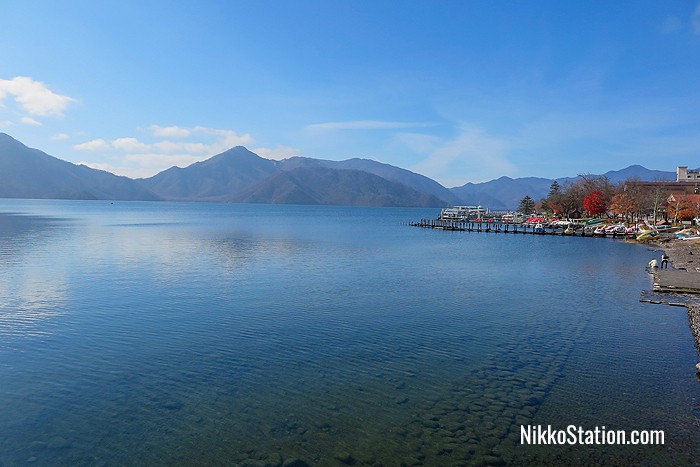 Lake Chuzenji was formed around 20,000 years ago when the volcanic Mount Nantai erupted and blocked the river that flowed through the valley below. Today the lake is fed by the Yukawa River and its outflow is the Daiya River which escapes over the dramatic Kegon Falls. The sacred mountain, Mount Nantai, rises above the lake’s northern shore, and the Senjogahara marshland spreads out from the north-west. The lake’s surface area is 11.62km2 and its circumference is 25km, which would take around 9 hours to walk.

At 1,269m above sea level, Lake Chuzenji also has the highest elevation of any natural lake in Japan over 4km2, which gives it a relatively cool climate, and this has made it a popular summer retreat area since the 19th century. However, the lake was first discovered in 782 by the Buddhist monk, Shodo Shonin, after he had climbed to the summit of Mount Nantai. Shodo Shonin founded Chuzenji Temple on the shore of the lake, and his ashes are enshrined on Kozukejima, a small island about 100 meters from the lake shore. 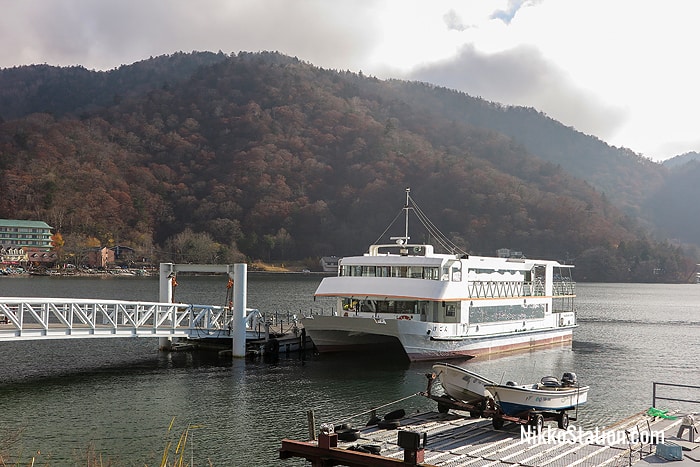 Taking a boat cruise is a must when visiting Lake Chuzenji. The standard sightseeing cruise does a circuit of the main sightseeing spots around the lake which include the embassy villas, and Chuzenji Temple. 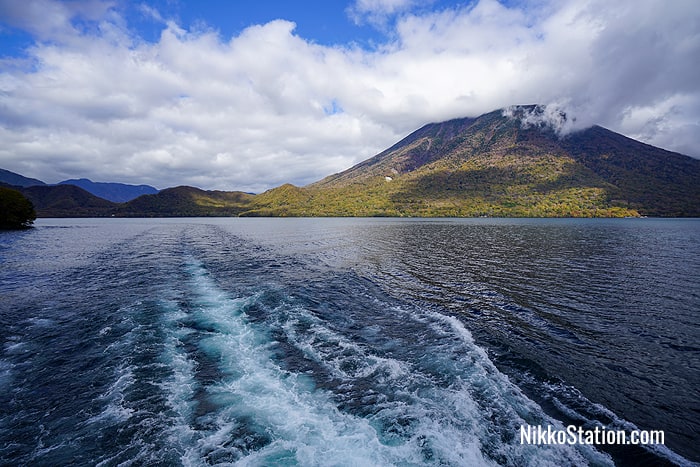 The view from the boat

The complete circuit lasts 55 minutes and costs 1,400 yen (700 yen for children), but you can pay less for a shorter trip and get off at one of the tourist spots on the way. Normally, there is one cruise every hour between 9.30 and 15.30 departing from the Chuzenji Boat Terminal, although the times may change slightly throughout the seasons. You can also get on a pleasure boat at one of the other terminals. In the autumn there are also special maple-leaf viewing cruises around the lake which take different routes. 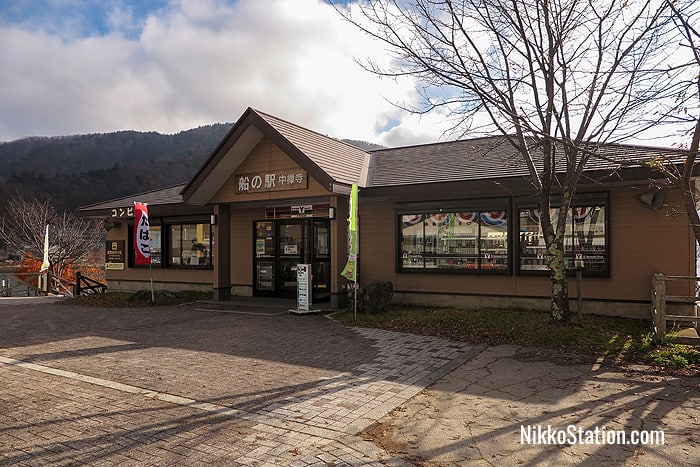 The Chuzenji Boat Terminal is an 8-minute walk from Chuzenji Onsen Bus Terminal. 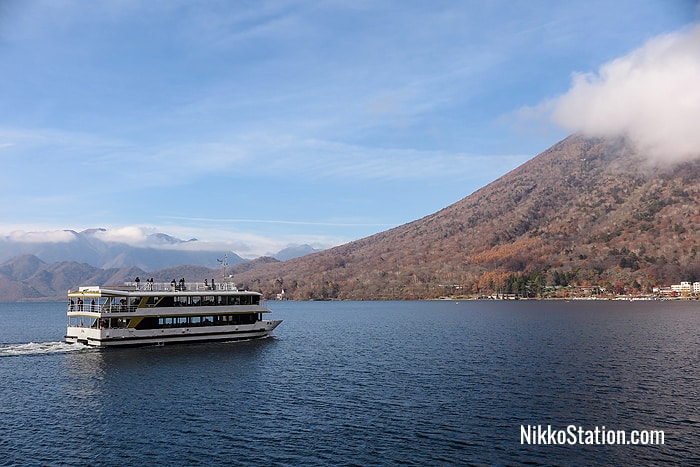 A pleasure boat tour on the lake

Chuzenji Onsen is a small hot spring spa town on the north-east side of the lake. Here you will find a number of resort hotels and traditional inns with their own natural hot spring bathing facilities. This is a good base for exploring the local area as it is served by the Chuzenji Onsen Bus Terminal, and is within walking distance from sightseeing locations like the Kegon Falls and Chuzenji Temple. The main pleasure boat terminal is also located in Chuzenji Onsen. 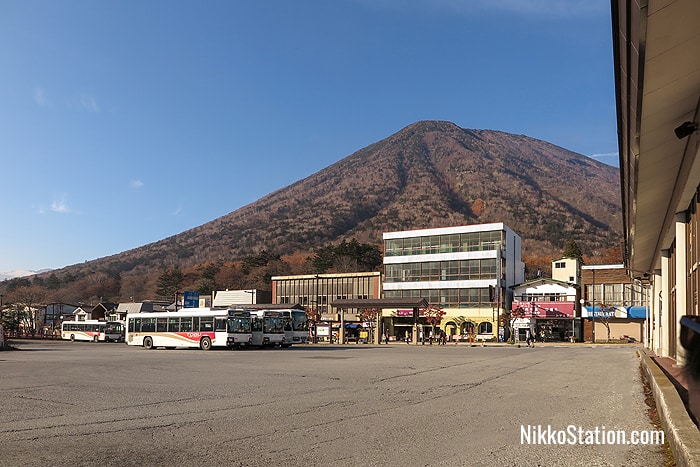 The main reason to stay in Chuzenji Onsen however is to enjoy the hot spring waters. These waters are rich in hydrogen sulfide which is believed to relieve the symptoms of muscle pain, rheumatism, skin problems, diabetes, and high blood pressure as well as general fatigue. Actually, this water is piped for 12kms from Yumoto Onsen (which is located further to the north). At Yumoto Onsen the water is 78° Celsius, but it cools down to a more comfortable temperature by the time it reaches Chuzenji Onsen.

Two reasonably priced three-star spa hotels in Chuzenji Onsen are Hatago Nagomi and Hotel Hana-an, both of which have their own restaurants. Hatago Nagomi has only Western-style guest rooms, but the hotel restaurant specializes in gourmet Japanese cuisine. Hotel Hana-an is a more traditional Japanese style inn which has both Western and Japanese style guest rooms and a restaurant that serves seasonal dishes using the finest local ingredients.

Nearby, Simplest Nikko is a three-star guest house which has a range of guest rooms and dormitory beds to suit every budget. Simplest Nikko also opens its hot spring baths to day trippers, so you don’t have to stay there to take a dip. Their “One-day Onsen” is normally open from 15.00 to 21.00 (with last entry at 20.00) and entry costs 1000 yen for adults and 500 yen for children. However, during busy periods the “One-day Onsen” may be closed, so it is best to check in advance.

Chuzenji Onsen’s most luxurious resort hotel is the Ritz-Carlton Nikko which has Japanese and Western dining facilities, a 24-hour fitness center, and friendly multilingual staff who can help arrange a variety of local tours, outdoor activities and cultural experiences. If you really want to treat yourself then the Ritz-Carlton is the place to come.

Lake Chuzenji became a popular international summer resort in the late 19th century after the first railway line between Utsunomiya and Nikko was opened in 1890. Foreign villas and summer cottages were built on the lake shore, and yachting and fly fishing became popular activities. Two villas that remain today are the Italian Embassy Villa and the British Embassy Villa and both of these can be visited. 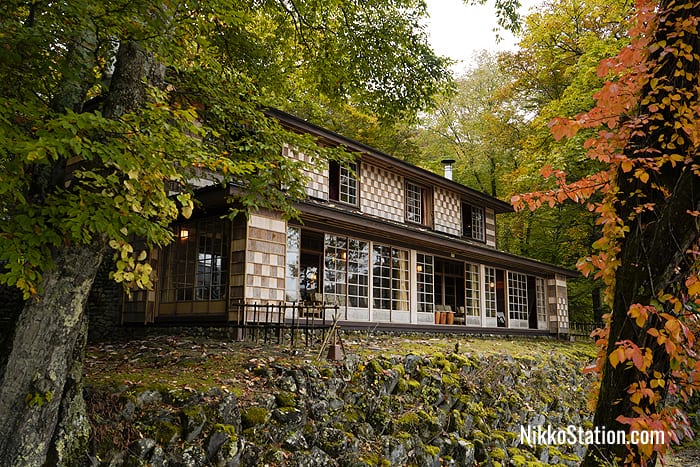 The two Italian Embassy Villa buildings were built in 1928 and designed by Antonin Raymond, a Czech American architect who previously worked with Frank Lloyd Wright, and who had a deep influence on modern Japanese architecture. These buildings remained in use as a recreational retreat for Italian ambassadors until 1997. Today the elegant villa buildings and their grounds are open as a museum called the Italian Embassy Villa Memorial Park. There is also a café on site where you can enjoy refreshments while admiring the villa gardens. Here is a map showing the Italian Embassy Villa Memorial Park’s location. It is a 35-minute walk from Chuzenji Onsen Bus Terminal. 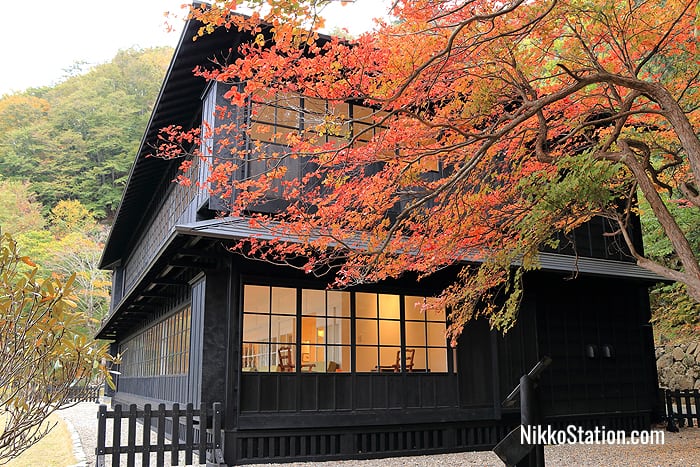 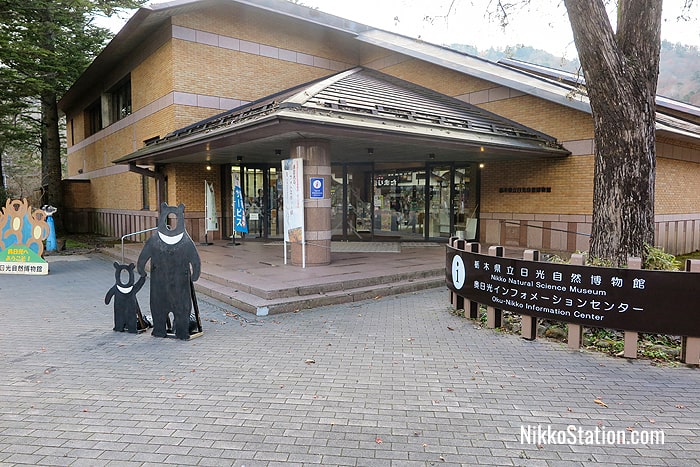 Just behind the Chuzenji Onsen Bus Terminal is a building that houses the Nikko Natural Science Museum and the local Tourist Information Center. The museum has a variety of exhibits related to the history and natural history of the Lake Chuzenji Onsen. There is also a shop on site selling nature-themed gifts and souvenirs. Entry to the museum is 510 yen for adults and 260 yen for children. 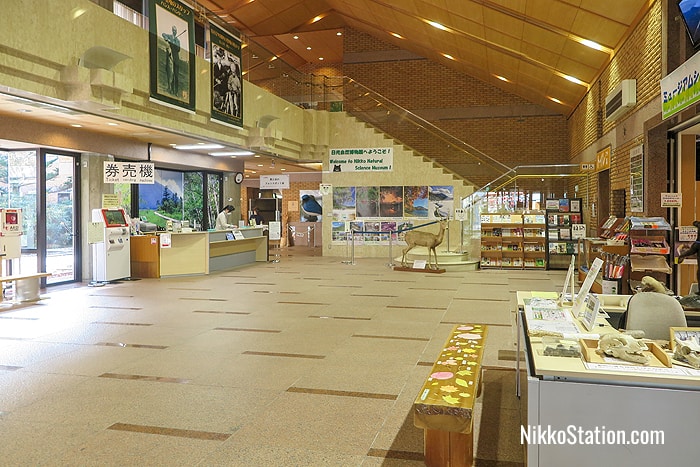 Inside the Nikko Natural Science Museum

On the first floor of this same building you can find the Tourist Information Center which has English-speaking staff and a variety of multilingual maps and brochures. Rental bicycles are also available here which cost 1,000 yen to rent per day. 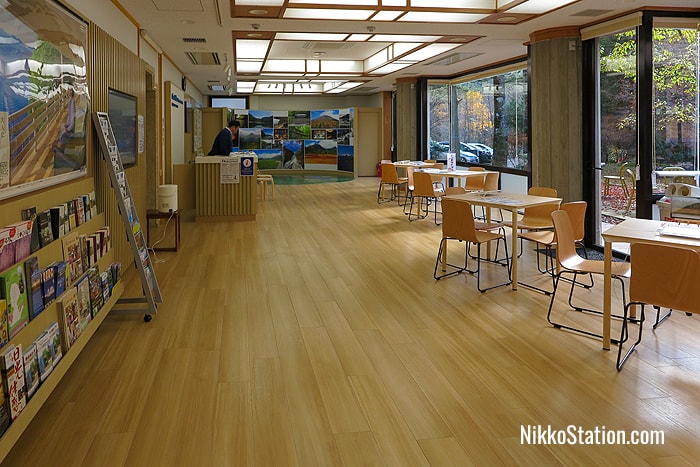 Inside the Tourist Information Center

The Nikko Natural Science Museum and the Oku-Niko Information Center are open from 9.00 to 17.00 from April 1st to November 10th and 10.00 to 16.00 during the rest of the year. They are closed on Mondays between December and April and also closed for the New Year holidays (December 29th to January 3rd). 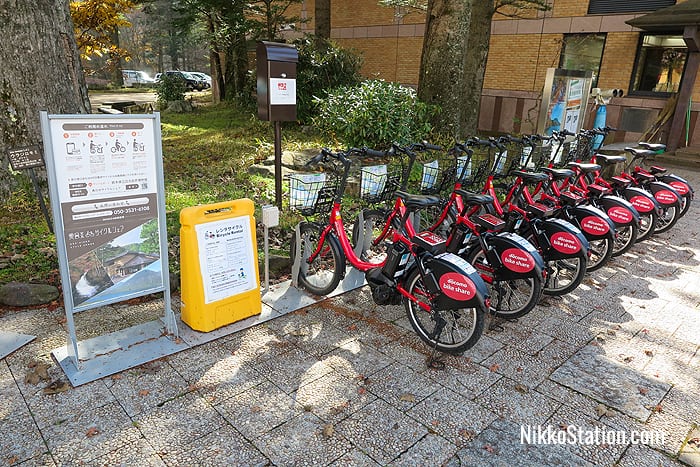 Rental bicycles outside the museum and information center 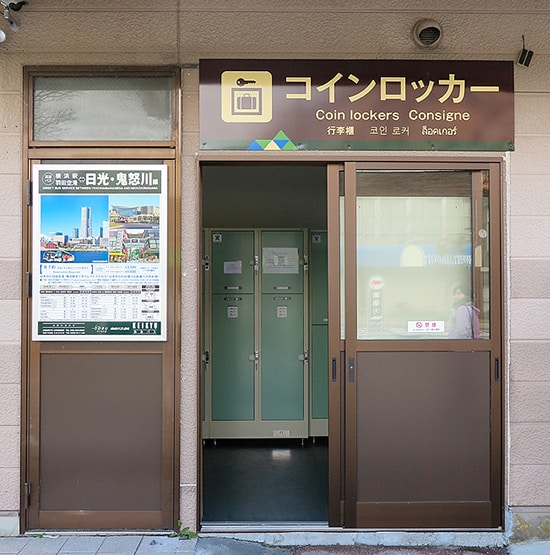 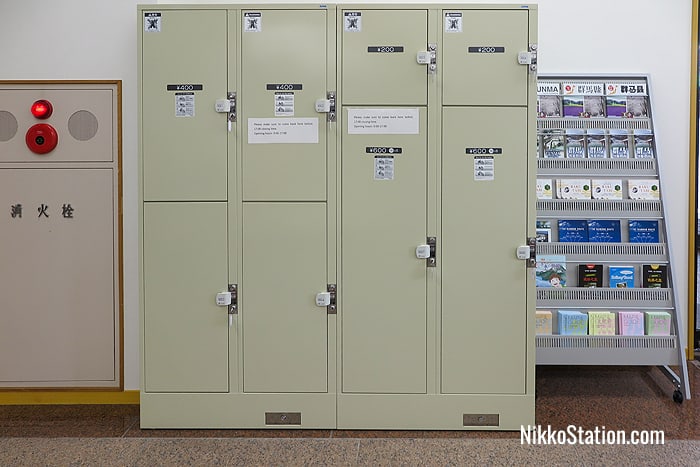 The easiest way to reach Lake Chuzenji is to take a bus bound for either Yumoto Onsen or Chuzenji Onsen from either the JR Nikko or Tobu Nikko railway stations. Buses leave regularly and take around 45 – 50 minutes to reach Chuzenji Onsen Bus Terminal. 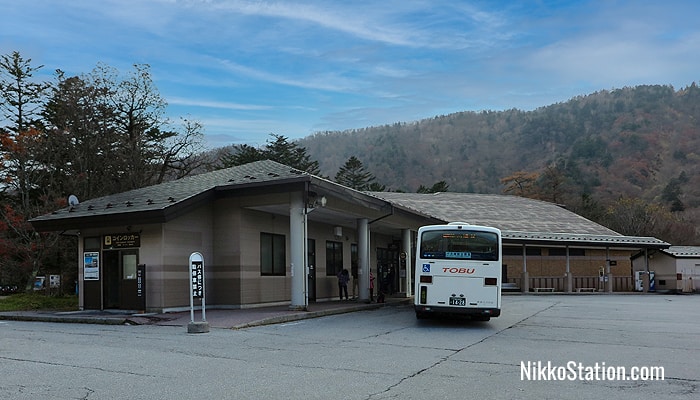 Alternatively, if you are driving, you can take the winding roads of Irohazaka, a famous driving route linking central Nikko with the highlands of Okunikko which has plenty of sightseeing spots on the way where you can stop and take pictures. This route can get busy on weekends and holidays however, and it can get particularly crowded during the fall foliage season of mid-October and early November. If you are interested in hiring a car while in this area, see our article Car Rental in Nikko.