Kegon Falls is a dramatic waterfall close by Lake Chuzenji in Nikko’s Okunikko region. Both the waterfall and Lake Chuzenji were formed 15,000 years ago when a volcanic eruption of Mount Nantai blocked the Daiya River. The waterfall is 97 meters high and the amount of water falling from the falls is believed to average 3 tons per second as it plunges down into the 4.5-meter-deep basin below. However, in the spring the amount of water increases with the melting snow. 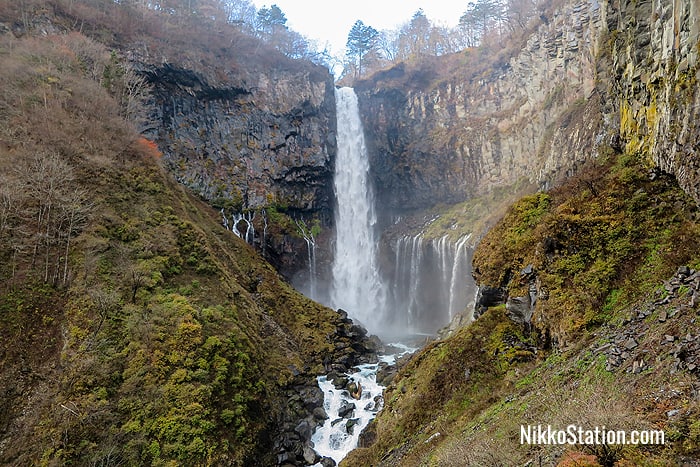 The Kegon Falls is definitely the most famous and most popular waterfall in Nikko and is also recognized as one of the three most beautiful waterfalls in Japan together with the Fukuroda Falls in Ibaraki Prefecture and the Nachi Falls in Wakayama. 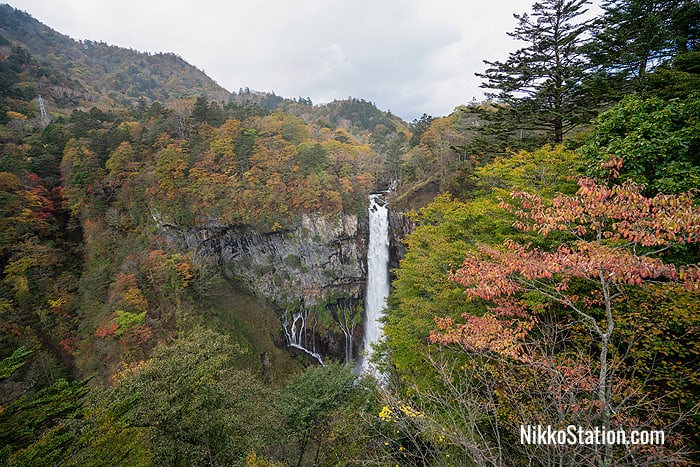 It is believed that the waterfall was discovered by the monk Shodo Shonin in the 8th century, and that he named it the Kegon Falls after the Buddhist Kegon Sutra, which is called the Flower Garland Sutra in English. Other waterfalls in the surrounding area were also named after important sutras. Shodo Shonin is a significant figure in Nikko’s history as he established Rinnoji Temple, Futarasan Jinja Shrine, and nearby Chuzenji Temple. Because Nikko grew up around these locations Shodo Shonin is known as the founder of Nikko. 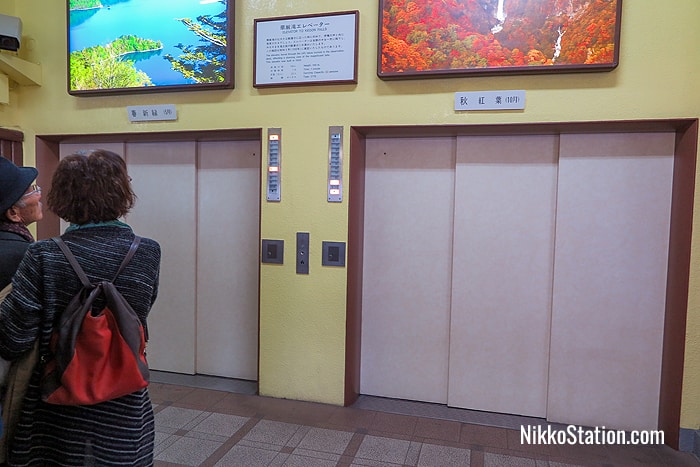 Waiting for the elevator

The Kegon Falls can be viewed up close from an observation deck that is accessed by an elevator. The elevator, which was built in 1930, takes 1 minute to carry passengers down 100 meters through solid bedrock to an observation deck with two levels. Here you can admire the full splendor of this stunning waterfall. 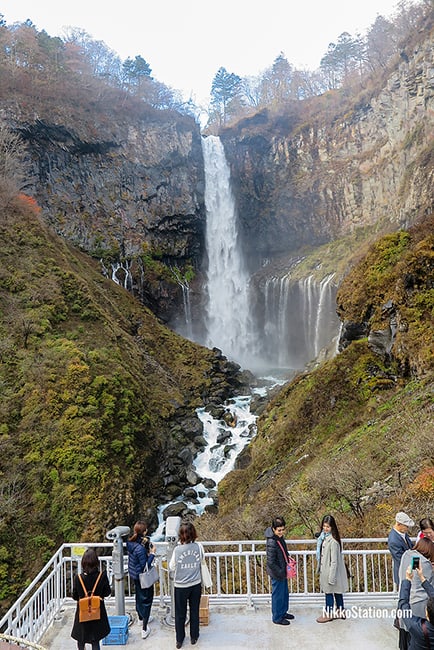 The view from the lower observation deck

After viewing the falls there are a number of cafes, cheap restaurants and food stalls around the Kegon Falls Elevator Office where you can get burgers, ice creams, and simple Japanese snacks. In particular, snacks using yuba (tofu skin) are a specialty of the area. 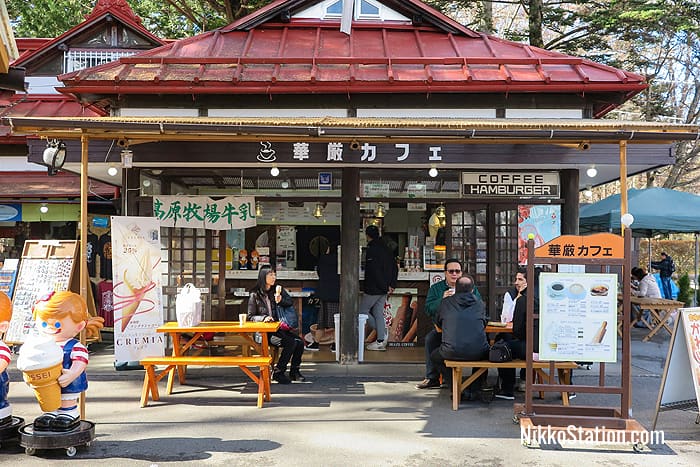 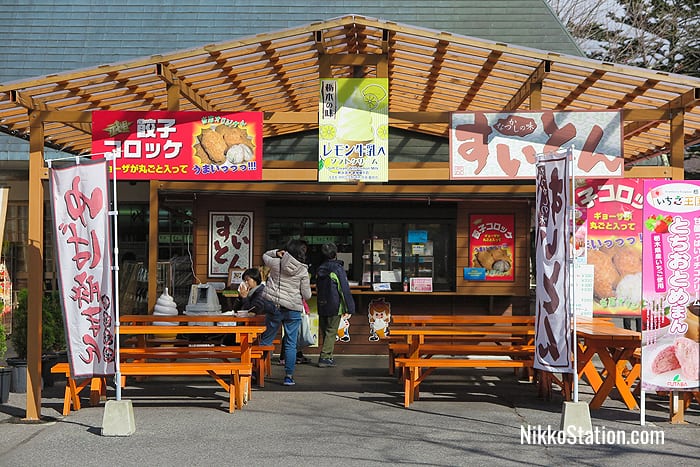 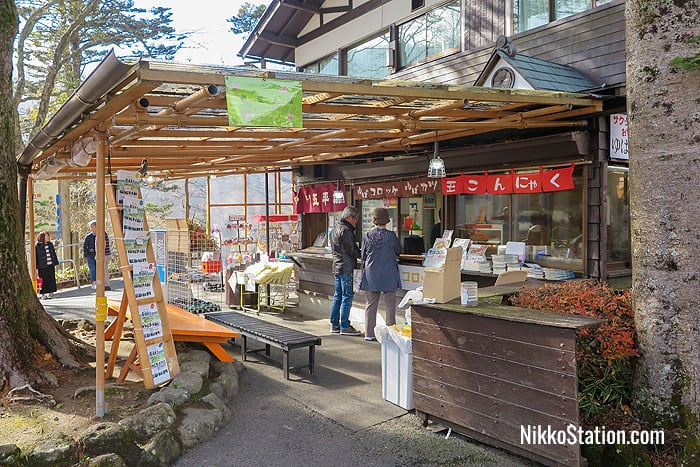 The Kegon Falls can also be seen from a distance, together with Lake Chuzenji, as part of a sweeping panoramic view from Akechidaira Observatory lookout point. The observatory can be reached by ropeway after taking a bus to the Akechidaira bus stop. If you plan to visit the observatory be aware that outbound buses from the Nikko Station area to Yumoto Onsen make a stop at Akechidaira, but buses returning to the Nikko Station area do not stop at Akechidaira, so you will not be able to stop there on your way back into town. 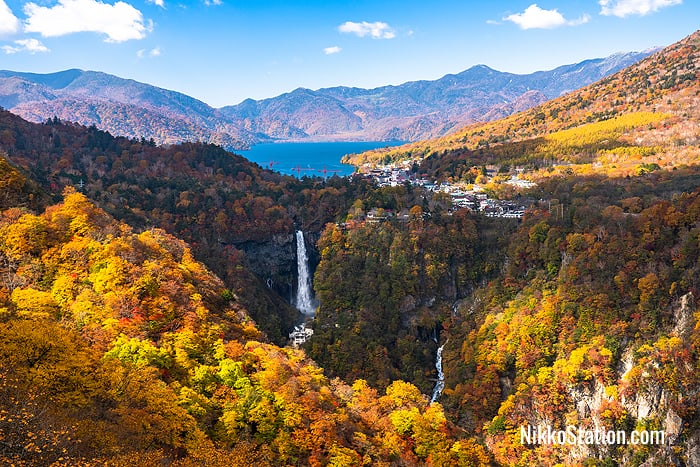 Kegon Falls and Lake Chuzenji viewed from the Akechidaira Observatory 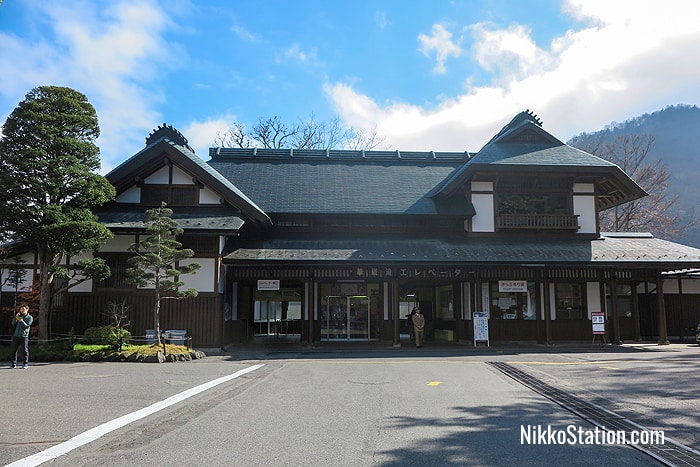 The fee to use the Kegon Falls Elevator is 570 yen for adults, 340 yen for children of elementary school age, and free for pre-school age children. Opening hours for the elevator vary through the year. Currently the opening hours are: 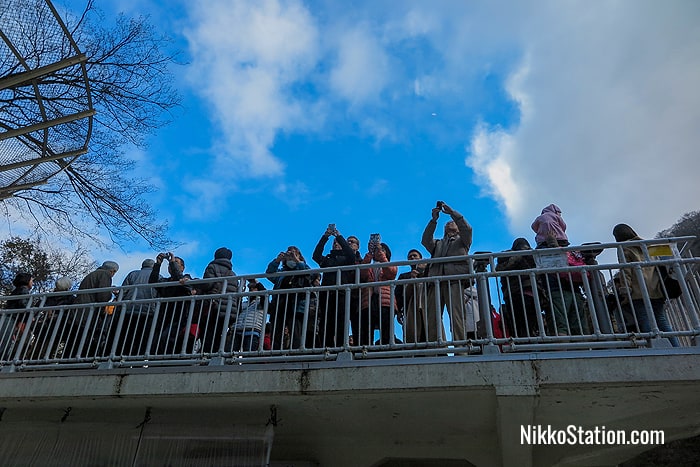