The Nikko is a limited express service that runs between Tobu Nikko Station in Tochigi Prefecture and Shinjuku Station in Tokyo in around 2 hours. This service is jointly run by JR East and Tobu Railway. Because this train travels over both JR and Tobu railway lines it is only partly covered by the Japan Rail Pass, so Japan Rail Pass holders have to pay extra for the Tobu Railway part of the route. 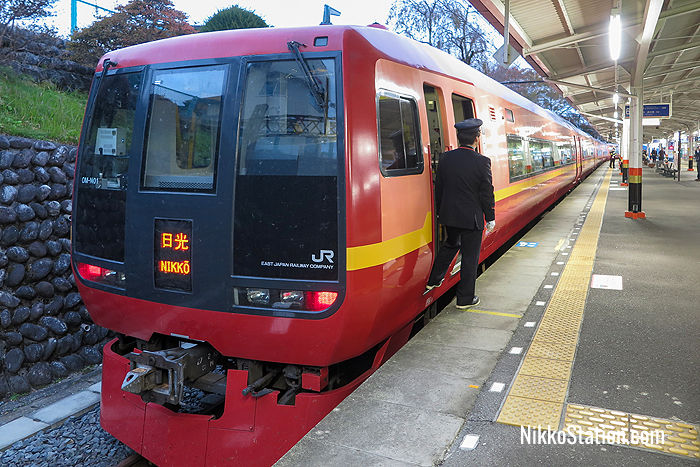 At Tobu Nikko Station the Nikko departs from platforms 4, 5, and 6. At Shinjuku Station it departs from JR platforms 5 and 6. All seats on this service must be reserved in advance, and you will have to pay a limited express surcharge as well as paying for your train ticket.

The Limited Express Nikko runs on the Tobu Nikko Line between Tobu Nikko and Tochigi before changing tracks at Kurihashi Station. The train then follows JR East’s Utsunomiya and Yamanote lines as far as Shinjuku. The Nikko makes passenger stops at the following 8 stations.

The key destinations and transfer points are listed below with rail fares (including the limited express surcharge) and example journey times given from Tobu Nikko Station. 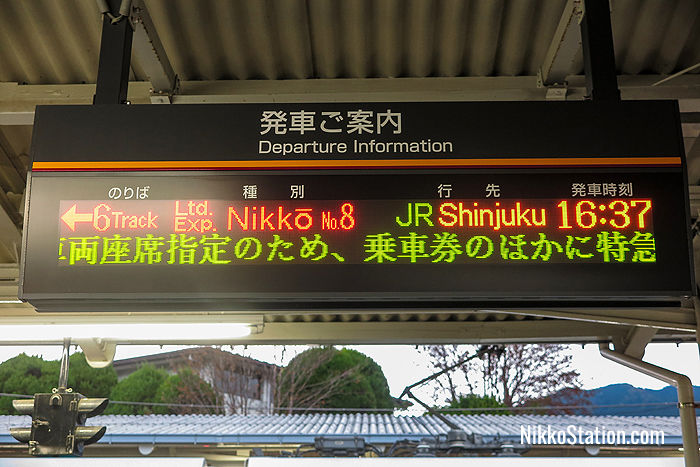 Nikko is a major tourist destination in Japan with many ancient shrines and temples and stunning natural scenery. Among Nikko’s many attractions are three UNESCO World Heritage sites: Toshogu Shrine, Futarasan Jinja Shrine, and Rinnoji Temple. Nikko is also the departure point for the Oku-Nikko region which is famous for its waterfalls, hot spring resorts, and the scenic Lake Chuzenji.

Tochigi City’s central sightseeing area is the old town area of Kuranomachi. This district has many historic wooden warehouses called “kura”. Local attractions include Tochigi Kuranomachi Museum of Art which is located in three 200-year-old warehouses, Tochigi Utamaro Museum which displays ukiyo-e prints by the artist Kitagawa Utamaro, and Okada Memorial Museum which is the 500 year old residence of the Okada clan and has on display many fine historic artifacts. Boat tours on the Uzuma River are also a popular activity. Transfers can be made at Tochigi Station to the JR Ryomo Line.

Ikebukuro is a major commercial center in Tokyo which is packed with department stores, electronics stores, restaurants and bars.

Shinjuku is one of Tokyo’s biggest commercial and entertainment districts with countless shopping, dining and entertainment opportunities. Top attractions include the Tokyo Metropolitan Government Buildings, the Kabukicho and Golden Gai nightlife districts, and Shinjuku Gyoen Park. 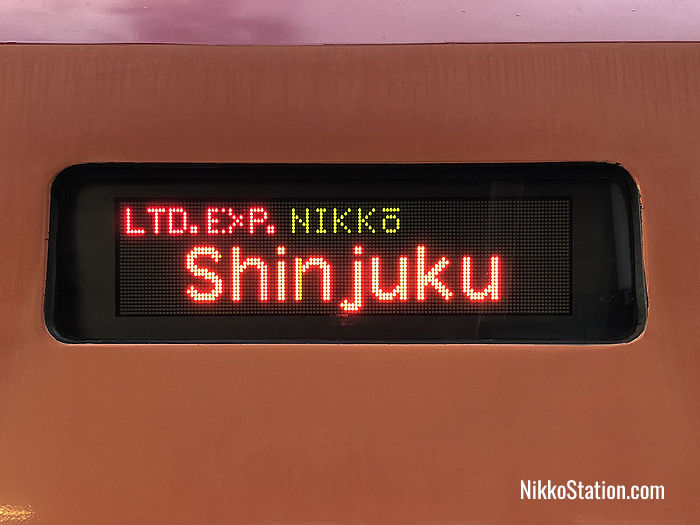 A carriage banner on the Limited Express Nikko

About the JR Limited Express Nikko

The Limited Express Nikko is a refurbished six-car #253 series train. This train has luggage compartments, spaces for wheelchairs, and a wheelchair accessible toilet. On board announcements and displayed information are given in Japanese, English, Chinese, and Korean. Tobu #100 series trains also sometimes run between Tobu Nikko and Shinjuku as the Limited Express Spacia Nikko. However, the Spacia Nikko is not a regularly scheduled service. 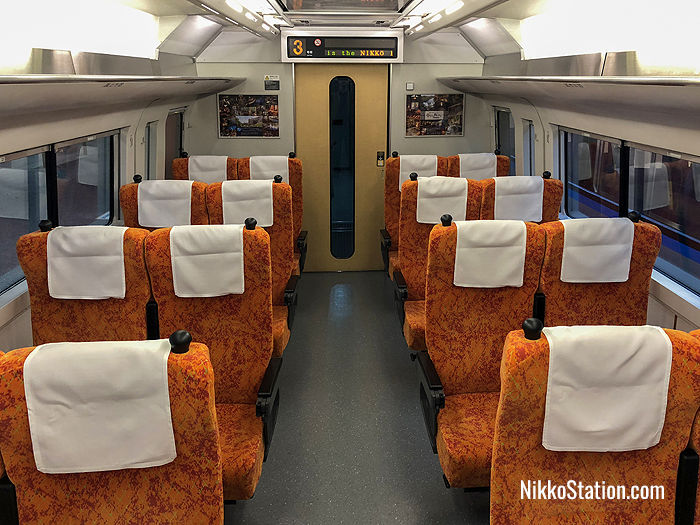 The Limited Express Nikko runs one regularly scheduled daily return service (Nikko #1 and #8) between Tobu Nikko Station and Shinjuku Station. In addition to this service there is a supplementary return service (Nikko #21 and #22) that operates during peak travel periods such as holiday weekends. To find out the dates when these additional services are running, please check JR East’s online timetables. The full timetable is given below with times from the main boarding locations.

Alternatives to the Limited Express Nikko

If you want to travel between Nikko and Tokyo using only the Japan Rail Pass, you can take the JR Nikko Line as far as Utsunomiya and then transfer to the Tohoku Shinkansen. The trip between JR Nikko Station and Tokyo Station can take as little as 1 hour and 48 minutes. Tobu Railway also operate a series of limited express services between Tobu Nikko Station and Tobu Asakusa Station in Tokyo. These include the regularly scheduled Revaty Kegon and Spacia Kegon services and the Kirifuri which only runs on weekends and holidays.

JR East have complete timetables for limited express and shinkansen services on their official website. To find the train times and routes that suit your own travel itinerary, we recommend using English language route finders like the Japan Transit Planner or Hyperdia.