Takinoo Jinja Shrine (sometimes called Takio Jinja Shrine) is an ancient Shinto shrine in Nikko which stands beside a beautiful waterfall called the Shiraito Falls. The shrine takes its name from the falls, as “Takinoo”’ means simply “waterfall”, while “Shiraito” means “white thread”. Nikko’s Takinoo Jinja is a sub-shrine of Futarasan Jinja Shrine and nationally designated as an Important Cultural Property. 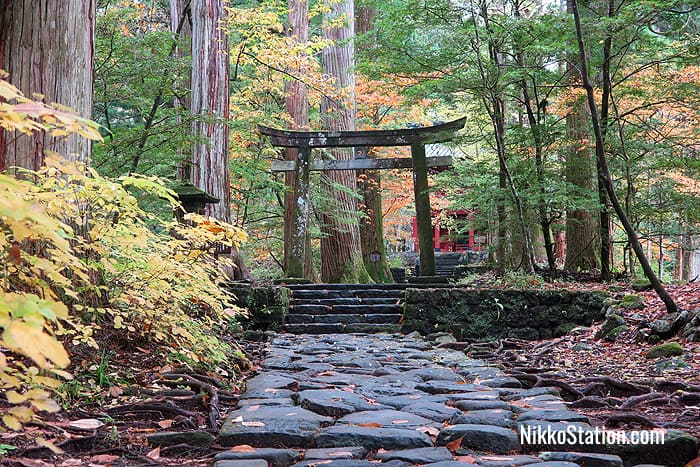 A shrine in the woods: Takinoo Jinja

Takinoo Jinja is located in the woods to the north of the Toshogu Shrine. Surrounded by old cedar trees, it is a peaceful location of quiet charm and because it is only 20 minutes on foot from the Toshogu, it makes for an easy escape from the sightseeing crowds at Nikko’s more popular attractions. 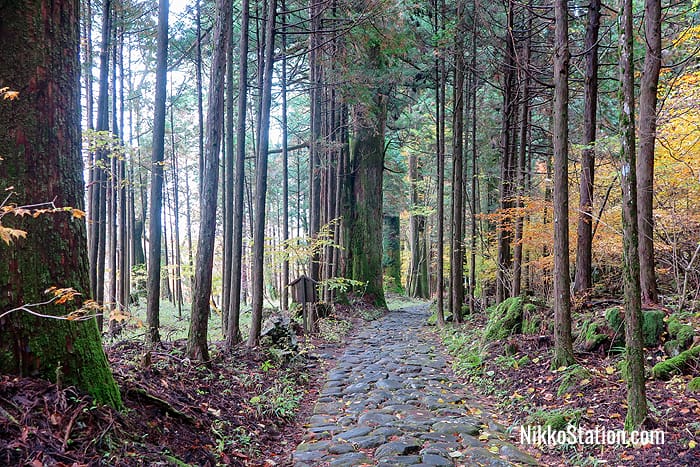 On the trail to Takinoo Jinja and the Shiraito Falls

To reach Takinoo Jinja you need to take a short hike through the woods along a trail called the Shiseki-tansho-ro (史跡探勝路) which means “Historic Sites Sightseeing Path”. As its name suggests the full course of this trail takes in many of Nikko’s major sites such as the Shinkyo Bridge and Futarasan Jinja, but in this article we will focus only on the stretch that runs from the Toshogu to Takinoo Jinja. This part of the trail should take only 20 minutes to walk and it makes for a very pleasant woodland stroll. 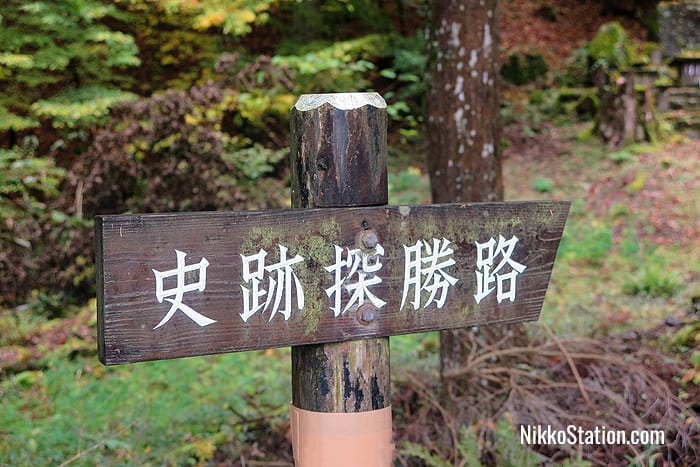 If you walk north on this trail from the Toshogu Shrine area, after 5 minutes you will see a small shrine on your left with mossy stone statues and lanterns. This is Kitano Jinja, which was founded in 1661, and dedicated to Tenjin-sama, the god of learning. It isn’t a major shrine, but if you have any exams or tests coming up, you might want to stop for a moment and pray for success! It should also reassure you that you are going the right way. 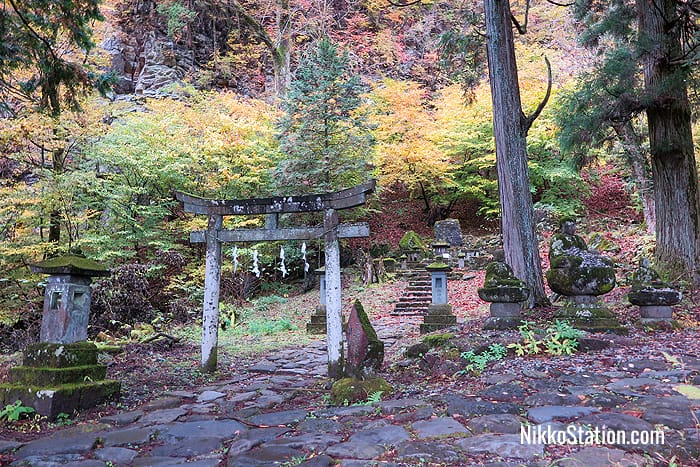 Keep walking for another 10 minutes or so and your path will cross a stream. Take the trail on your left to view the Shiraito Falls. “Shiraito” or “white thread” is actually quite a common name used for waterfalls in many locations throughout Japan. Nikko’s Shiraito Falls are about 10 meters high and are very pretty. It is believed that the Buddhist saint Kukai did some form of spiritual training at this location. 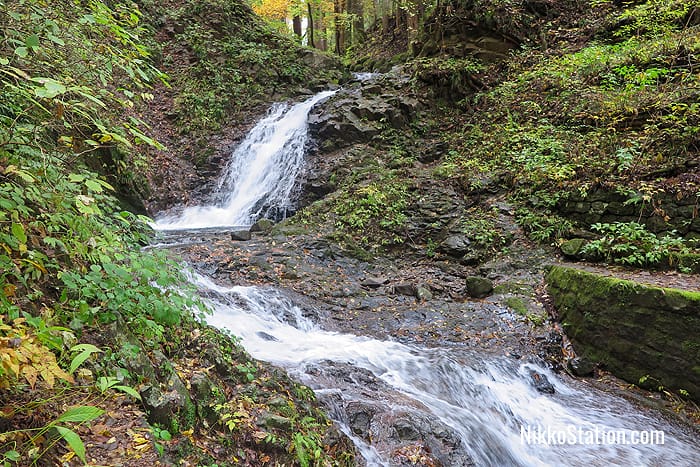 Not far from the Shiraito Falls you will see the entrance to Takinoo Jinja. Just in front of the entrance is a memorial stone to John K. Emmerson (1908-1984), an American diplomat who served in Japan and who was very fond of the scenery in this area. 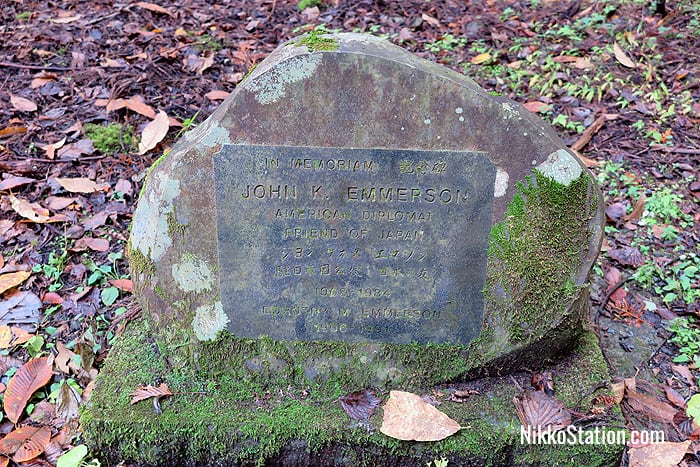 The monument to John K. Emmerson 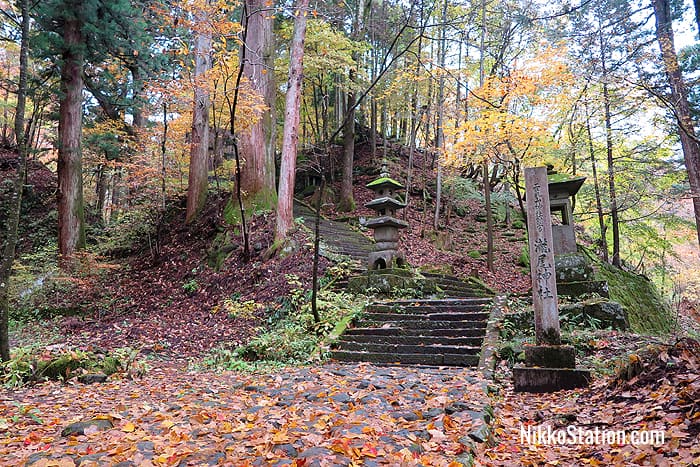 The entrance to Takinoo Jinja

It is believed that the Buddhist saint Kukai founded Takinoo Jinja here in the year 820, after he had a vision of the goddess Tagorihime in these woods. The shrine is dedicated to Tagorihime and to the guardian goddess of the holy mountain, Mount Nyoho. The current shrine buildings date back as far as 1646. There are a number of interesting structures and sacred sites in this shrine. 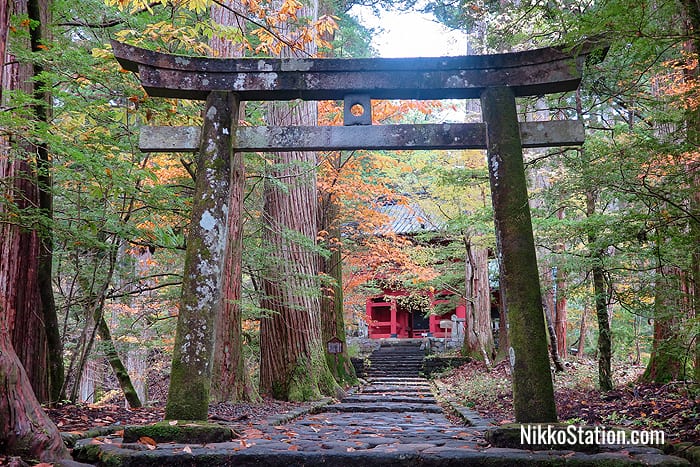 Undameshi-no-Torii is a large granite gate which was erected in 1696. It’s name means “try your luck gate”. If you look at the gate you can see a frame with a circular hole in it between the gate’s crossbeams. To test your luck, try to throw three stones through the hole. The more stones you get through the hole, the luckier you are. 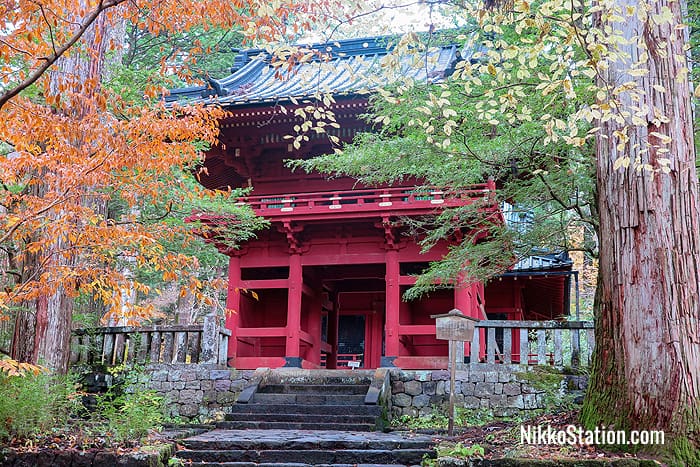 This two-storied tower gate is called the Romon and it is an Important Cultural Property. This building contained calligraphy by Kukai and statues of Buddhist guardian spirits until 1871 when the government ordered the Shinto and Buddhist religions to be separated and these Buddhist objects were removed. 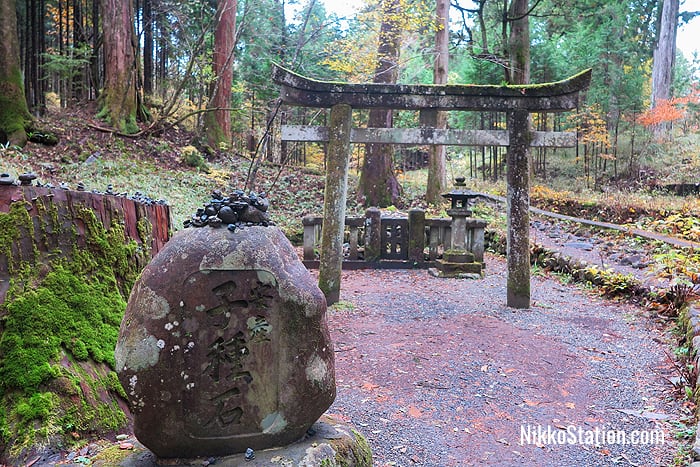 This sacred stone is called the Anzan-kodane-ishi or “easy childbirth stone”. People pray here to have children or to have an easy birth. 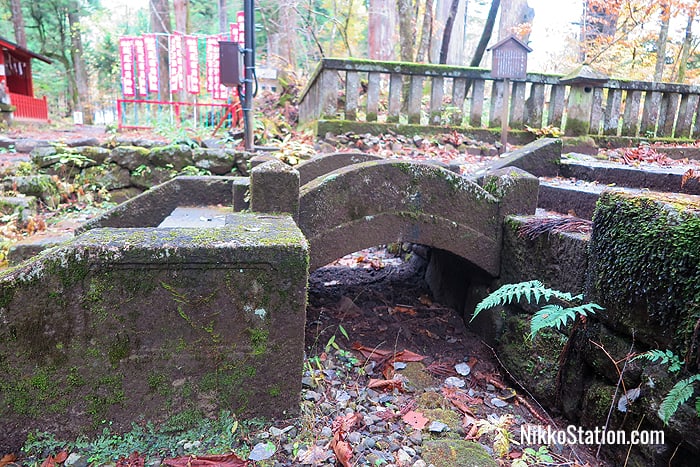 This small bridge was built in 1677 and its official name is Munen-bashi. Munen means “freedom from desires” and bashi means “bridge”. If you stand on this bridge, you can see Mount Nyoho through three sacred cedar trees that stand nearby. Originally, this was a bridge of spiritual purification and crossing it symbolized separation from the world. However, a tradition developed that if you can cross this bridge with the same number of steps as your age, then this will be equivalent to climbing to the shrine on top of Mount Nyoho and your wishes will come true. For that reason the bridge is now also called Negai-bashi or “wish bridge”. 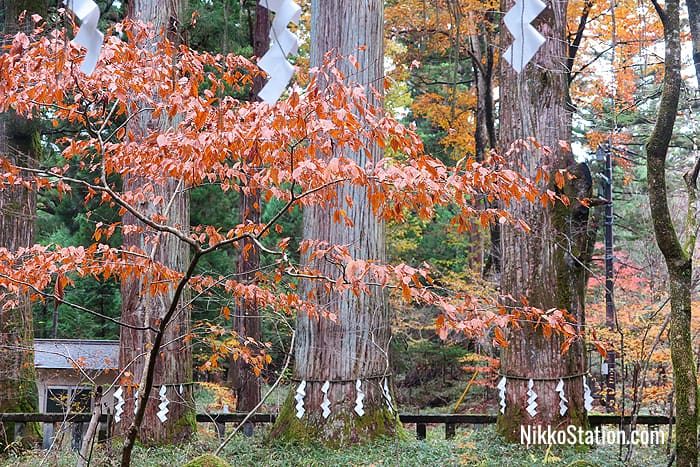 These trees are called the Sanbon Sugi Shinboku which means the “three sacred cedar trees”. Apparently, this is the spot where Kukai saw the goddess Tagorihime. However, these are not the original trees, but the second generation. The first generation of Sanbon Sugi fell down in the 17th and 18th centuries and because they were sacred, they were left lying on the ground here where they can still be seen. The current trees are between 250 and 300 years old and the stone fence that encloses them was built in 1749. 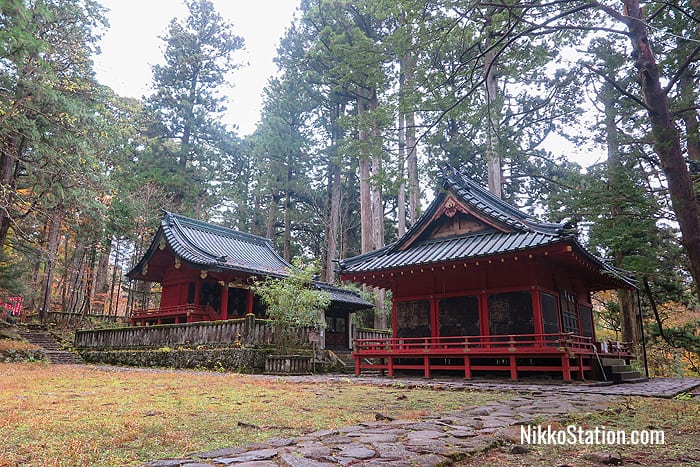 The Haiden on the right and the Honden on the left

The Haiden or Prayer Hall, and the Honden or Main Hall are the main buildings of the shrine. In particular, the Honden with its colorful, lacquered Karamon gate is an Important Cultural Property which was built in 1713. 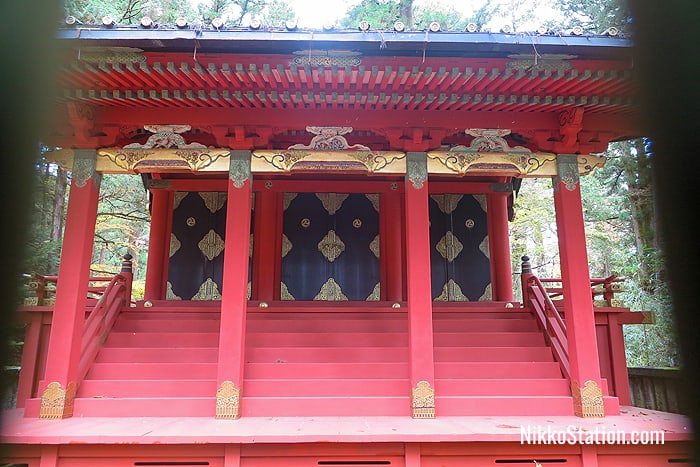 The Honden viewed through the Karamon gate

This Honden’s unique point is that it has a door at the rear of the building instead of the front. This was done so that people using the Honden could see the sacred mountain, Mount Nyoho. 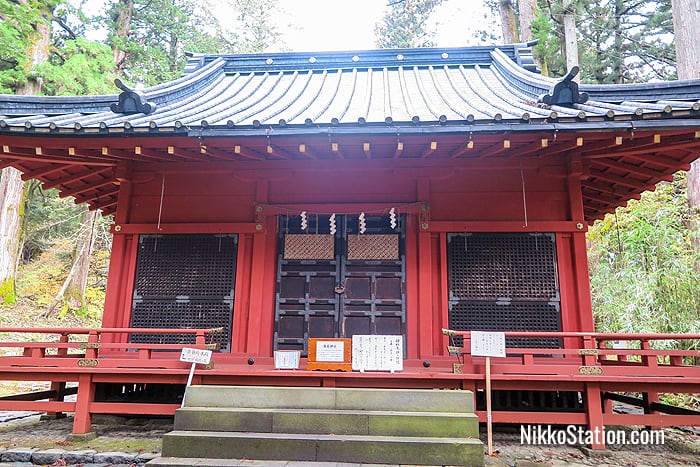 The back of the Honden with its unusual rear entrance

There is also a sub-shrine on Takinoo Jinja’s grounds which is dedicated to Inari, the god of rice. Inari shrines are always easy to identify because they have guardian fox statues on either side of the building. Foxes are considered the messengers of Inari. 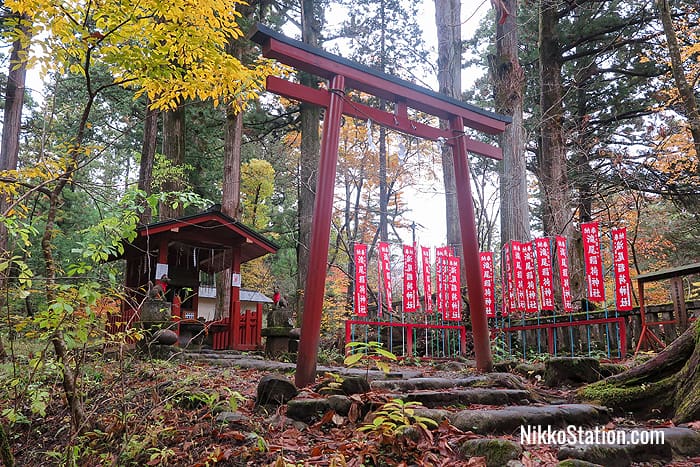 Although Takinoo Jinja may seem like a small attraction compared to Nikko’s other major sites, it plays an important part in Nikko’s annual spring festival. Every April 13th to 17th there is a spring festival called Yayoi Matsuri in which a mikoshi, or portable shrine, is carried in procession from Futarasan Jinja to Takinoo Jinja. This festival is over 1,200 years old. 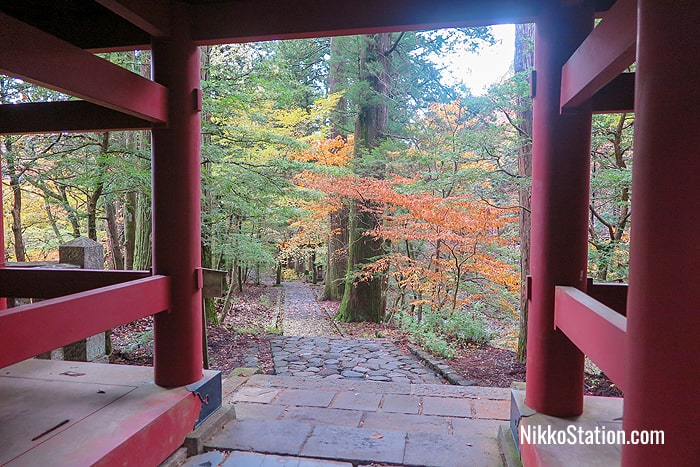 The path back from Takinoo Jinja viewed from the Romon gate

Takinoo Jinja and the Shiraito Falls are a 20-minute hike from the Toshogu Shrine. You can find the entrance to the trail just north of the Toshogu Art Museum.