Futarasan Jinja is a major Shinto shrine in central Nikko which was founded in 767 by the Buddhist priest Shodo Shonin. Shodo Shonin also established nearby Rinnoji Temple and Chuzenji Temple which is located on the banks of Lake Chuzenji. Together with Rinnoji Temple and the Toshogu Shrine, Futarasan Jinja is one of the Shrines and Temples of Nikko UNESCO World Heritage Site. 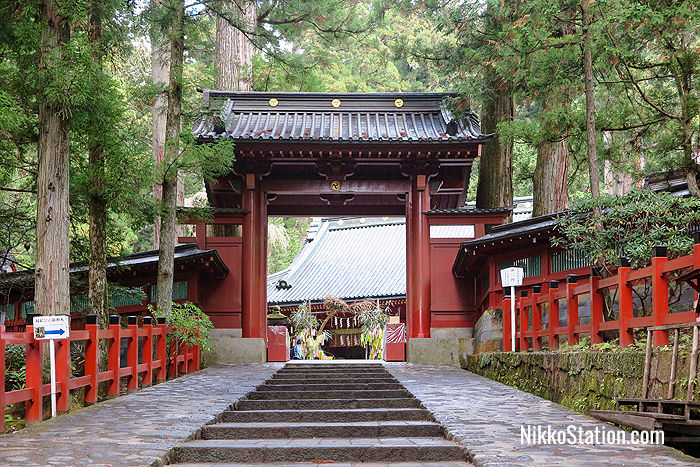 The entrance to the Futarasan Jinja Shrine

A family of three gods are enshrined at Futarasan Jinja: Okuninushi the father, Tagorihime the mother, and Ajisukitakahikone the son. However, the shrine is named after nearby Mount Nantai, which is also called Futara-san and which has been worshipped as a sacred mountain and the guardian of the Nikko area since ancient times. This shrine is the main Futarasan shrine in Nikko, but there are also two smaller Futarasan shrines: one on the shore of Lake Chuzenji and another on the summit of Mount Nantai. The Shinkyo Bridge which stands at the entrance to central Nikko, and the Kegon Falls in Oku-Nikko are also properties of Futarasan Jinja. 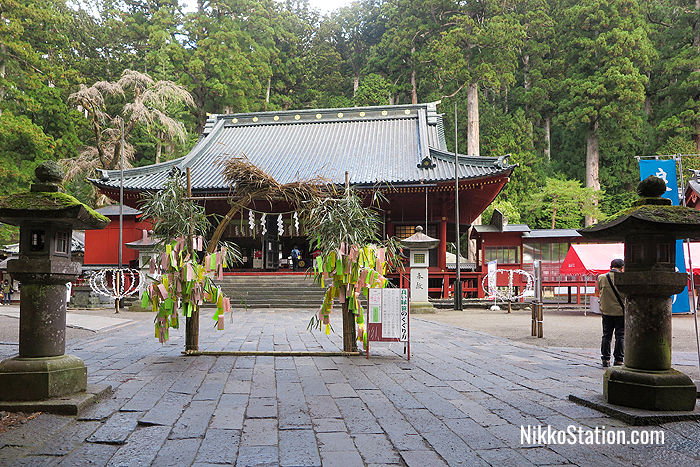 The view from the entrance

In addition to the main shrine buildings which are located near the entrance there are many sub-shrines and other features in the shrine gardens which are worth exploring. 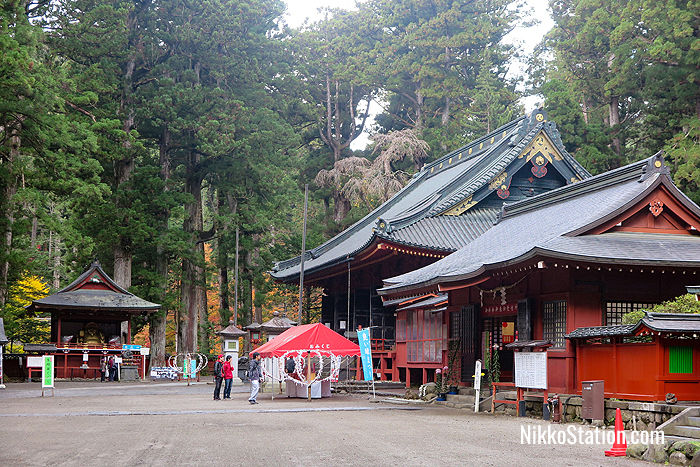 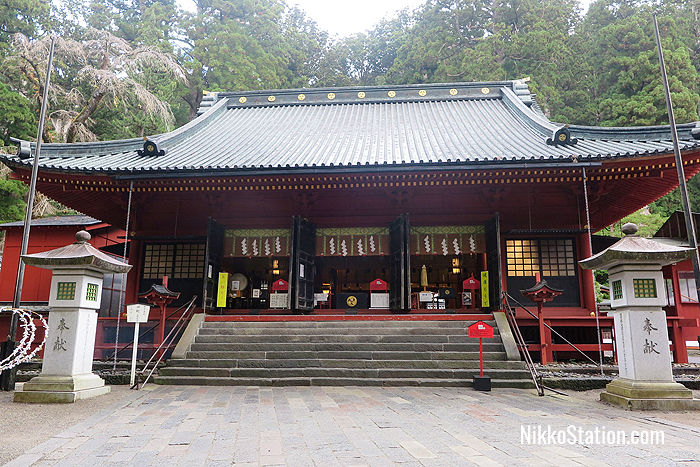 The Haiden or “Worship Hall” was first built in 1619, but the present hall dates from 1645

Going deeper into the shrine gardens you can find a smaller sub-shrine called the Daidokuden. This building is dedicated to the god Okuninushi, the “nation builder”. A festival in honor of Okuninushi called Daikoku Matsuri is held here on the first weekend of June each year and features food stalls, a flea market and taiko drum performances. 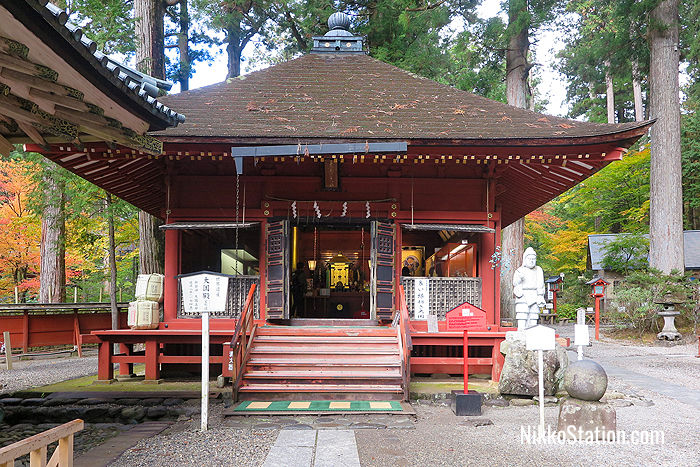 In front of the Daidokuden (on the right side in the picture above) you can see a statue of Okuninushi and in front of the statue is a perfectly round stone orb called the Maruishi. This stone is related to a story about Okuninushi. When Okuninushi was building the nation of Japan, a god appeared before him in the shape of shining orb and promised to help Okuninushi with his work. Beside the stone orb at Futarasan Jinja is a sign that says if people can make their hearts smooth and round like the orb and live calmly, then good fortune will come to both humanity and nature. 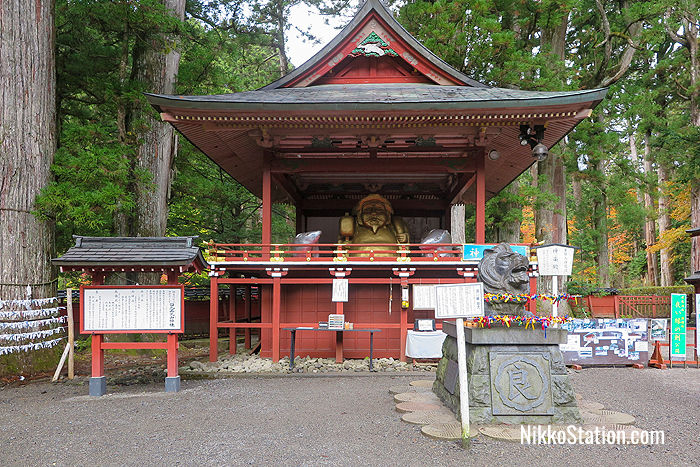 Close by the shrine to Okuninushi is a small shrine to Daikoku. Daikoku is one of the Seven Lucky Gods and is a god of wealth, as well as protecting the household and the kitchen. He is associated with Okuninushi because the characters for “Okuni” can be also be read as “Daikoku”. Daikoku is shown here with his golden mallet which symbolizes prosperity and with rats which symbolize having plenty of food. 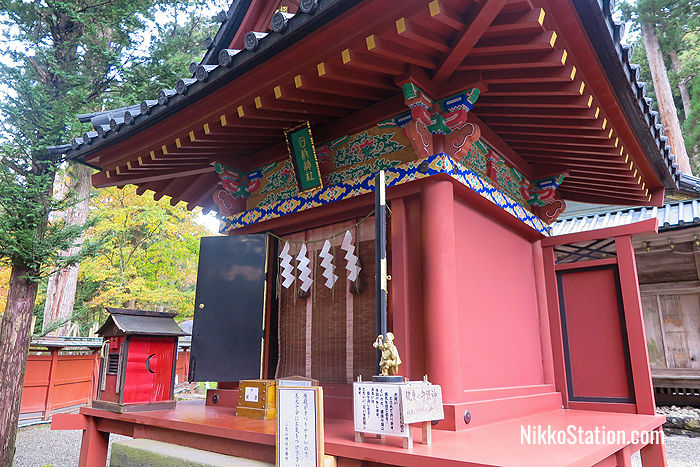 The Hiei Shrine is another Important Cultural Property. This shrine was first established in 848, but the current building dates from 1651. This shrine is dedicated to Oyamakui-no-kami, a mountain god who is worshipped as a god of good health. 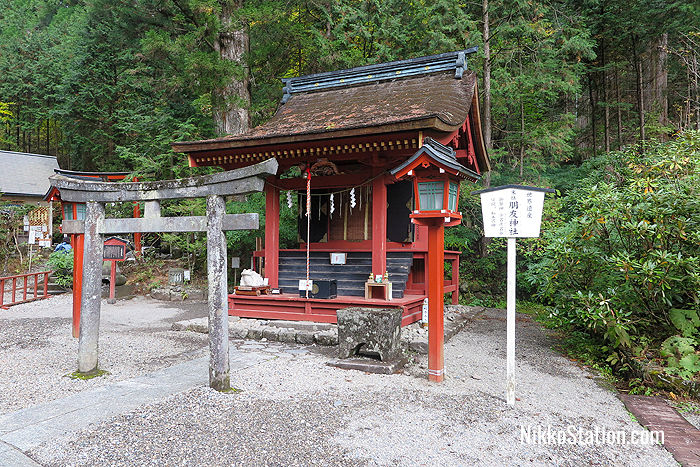 Mitomo Jinja is another Important Cultural Property which dates from 1763. The name “Mitomo” means “friend” and this shrine is dedicated to the dwarf god Sukunahikona who was the friend of Okuninushi. Sukunahikona is worshipped as the god of wisdom. 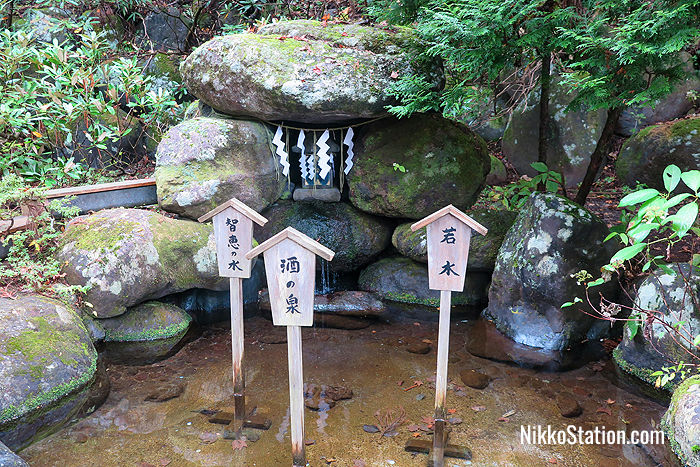 At the far end of the shrine gardens is a sacred spring. The water from this spring is called “wakagaeri-no-mizu” which means “rejuvenating water” because it is believed to be good for your general health, beauty and eyesight. 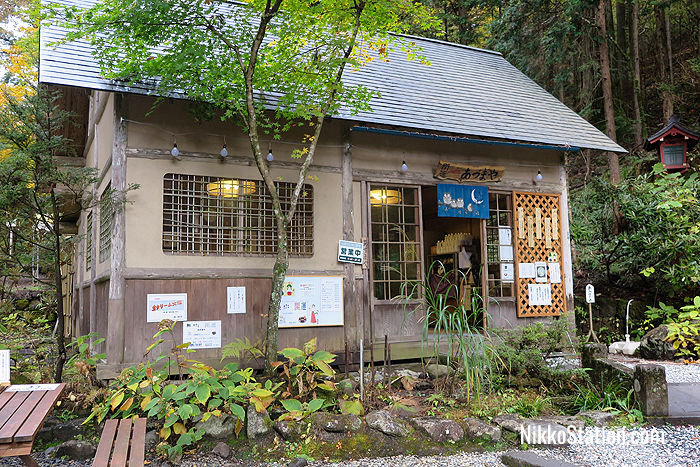 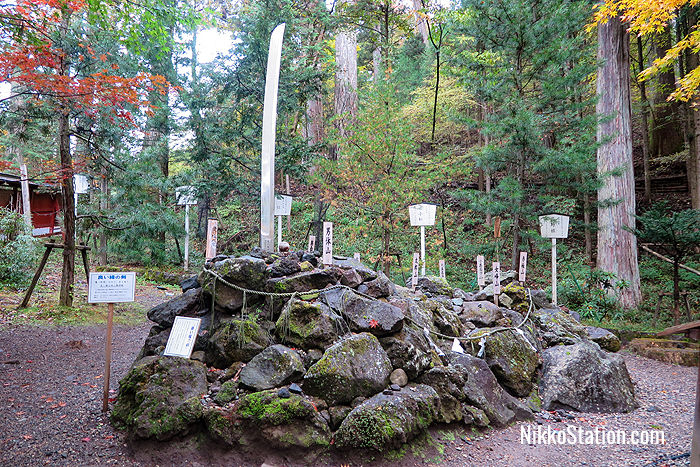 Yoi-En-no-Tsurugi – the Sword of Good Relationships

In one part of the shrine grounds you can find a large pile of stones with a large sword sticking out of one end. The stones represent the eight sacred mountains of the Nikko mountain range and the sword is a replica of a much larger sacred sword that is kept at the shrine on top of Mount Nantai. The stones and sword were placed here so that elderly and disabled people who are unable to climb the sacred mountains can still pray here to the mountain gods. The sacred sword is called “Yoi-En-no-Tsurugi” which means the “Sword of Good Relationships” and it is believed to have the power to cut away the bad influences in your life. 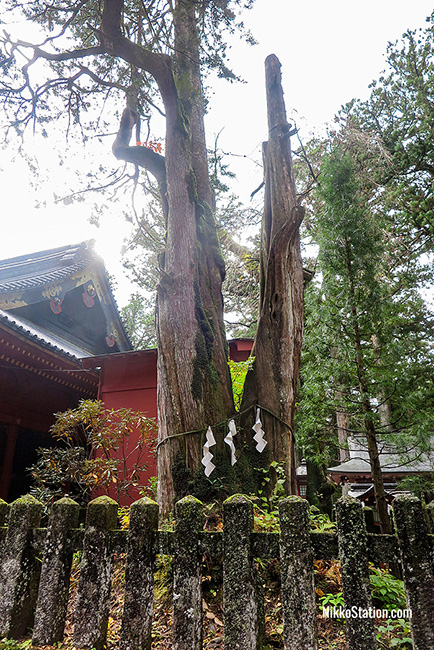 Also in the shrine gardens is an ancient pine which was planted in the year 820 by the Buddhist saint Kukai. 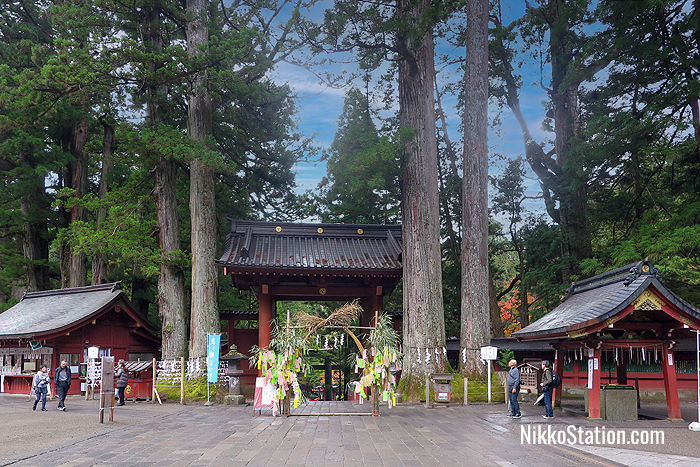 Like most Shinto shrines in Japan the main area of Futarasan Jinja is free to enter, but there is a 200 yen entry fee to view the shrine gardens which is where most of the sub-shrines are located. Children of elementary school age or younger can enter the shrine gardens for 100 yen.

The entrance to Futarasan Jinja is right beside the entrance to the Toshogu Shrine. A bus from either the JR or Tobu Nikko stations will get you to the shrine in under 10 minutes and drop you right outside the entrance. Walking the same distance would take around 40 minutes.