Taiyuin Temple is the mausoleum of Tokugawa Iemitsu (1604-1651) who was the third shogun of the Tokugawa family. Taiyuin is also the Buddhist name given to Iemitsu after he died. As a sub-temple of Rinnoji Temple it forms part of the Shrines and Temples of Nikko UNESCO World Heritage Site along with nearby Futarasan Jinja Shrine and the Toshogu Shrine where Iemitsu’s grandfather Tokugawa Ieyasu (1543 – 1616) is buried. Iemitsu left instructions that his mausoleum should not be greater than that of his grandfather, so the Taiyuin is smaller than the Toshogu and a leisurely visit to this location should take from 30 minutes to an hour at most. 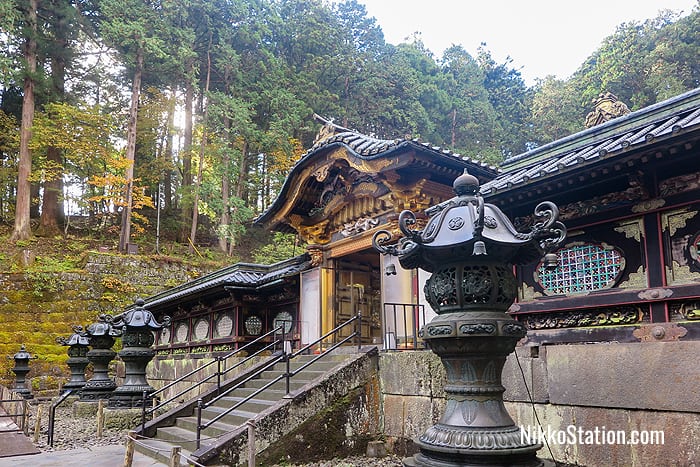 A side view of the Karamon Gate at Taiyuin Temple

Despite Iemitsu’s modesty, Taiyuin is a very grand complex of buildings. After arriving at Taiyuin, visitors pass through a series of beautifully decorated gates, climbing up through several tiered levels of woodland, until they reach the main buildings and the area where Iemitsu lies buried. Each of the gates is a nationally registered Important Cultural Property. The first gate is called the Niomon which means “Nio Gate”. Inside the Niomon are two statues of Deva Kings (called “Nio” in Japanese), one with an open mouth and one with a closed mouth. These are guardian gods and their two expressions together represent harmony. 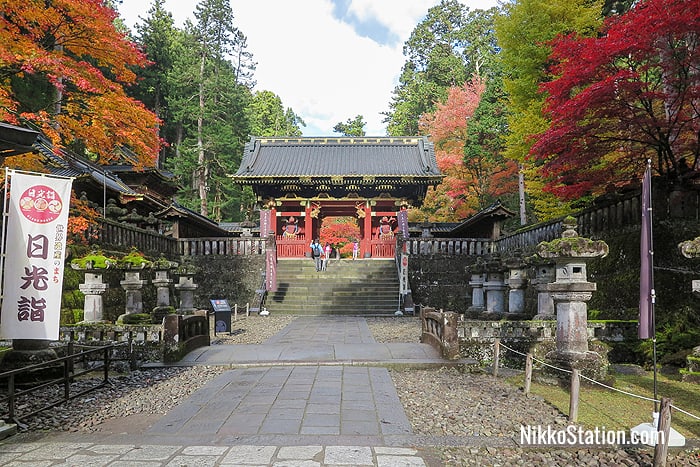 The next gate you will come to is the Nitenmon which is the biggest gate of all the gates in the Nikko World Heritage Site. 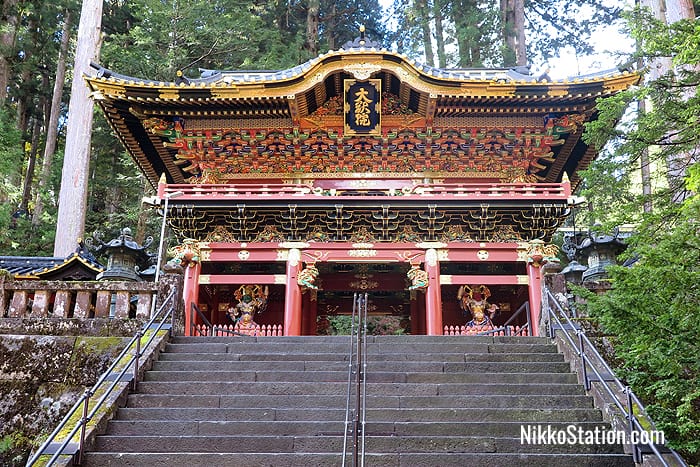 This gate has much more colorful and complex decorations and has two heavenly kings which stand guard on either side. On the left is a green faced figure called Jikokuten, the “Guardian of the Nation”. On the right is a red-faced king called Zochoten, the “Lord of Spiritual Growth”. 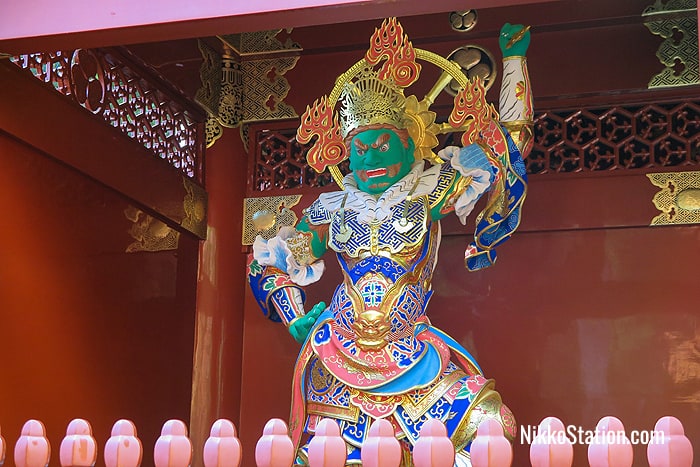 Jikokuten – the Guardian of the Nation 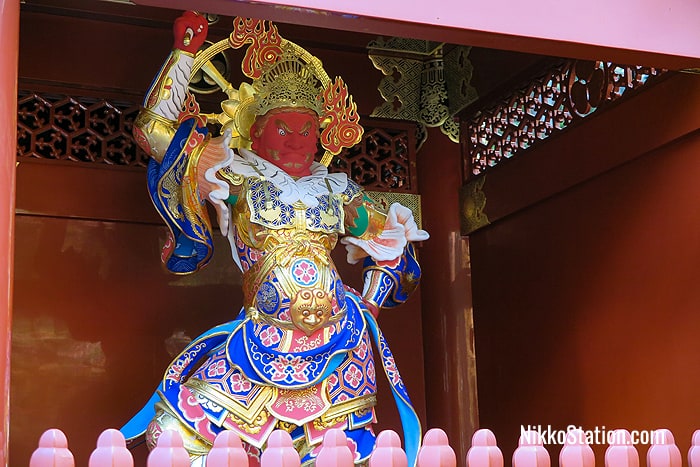 Zochoten – the Lord of Spiritual Growth 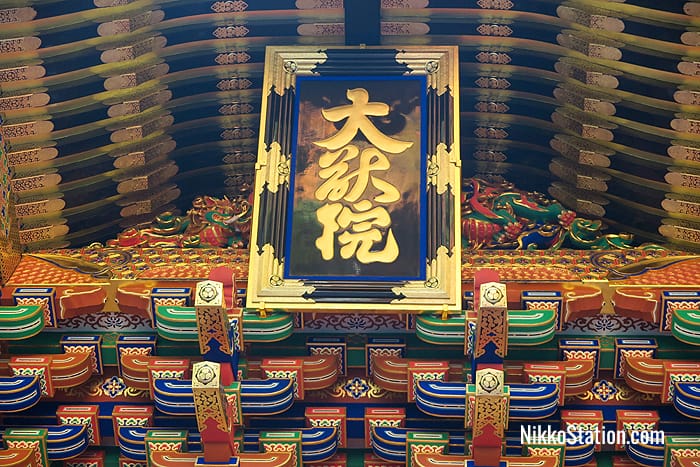 The next gate you will come to is the Yashamon. Four Buddhist guardian gods called “Yasha” are enshrined in this gate. Because this gate is engraved with many peony flowers it is also sometimes called the “Botan-mon” which means “Peony Gate”. 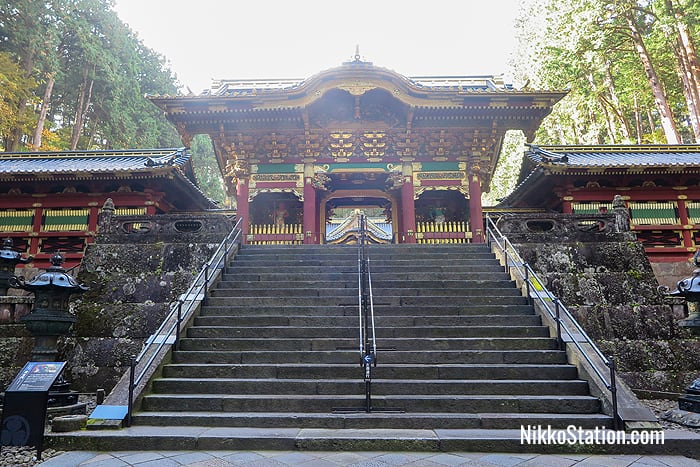 The Yashamon – the Peony Gate

As you approach the gate you will see the red statue of Bidara on the left and the green statue of Abatsumara on the right. 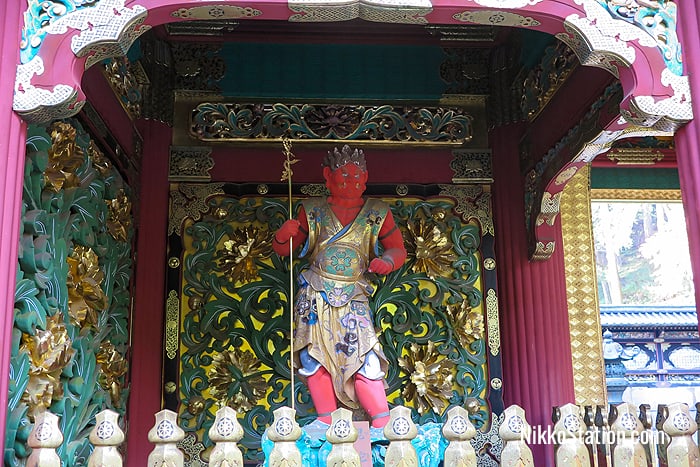 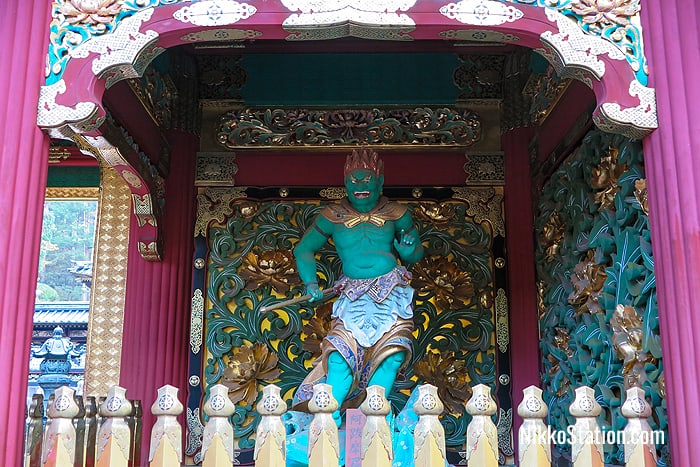 Having passed through the gate, turn around to look at it and you will see the blue Umarokya on the left and the white Kendara on the right. Umarokya is a particularly rare statue in Japan. These four Yasha spirits guard the mausoleum. 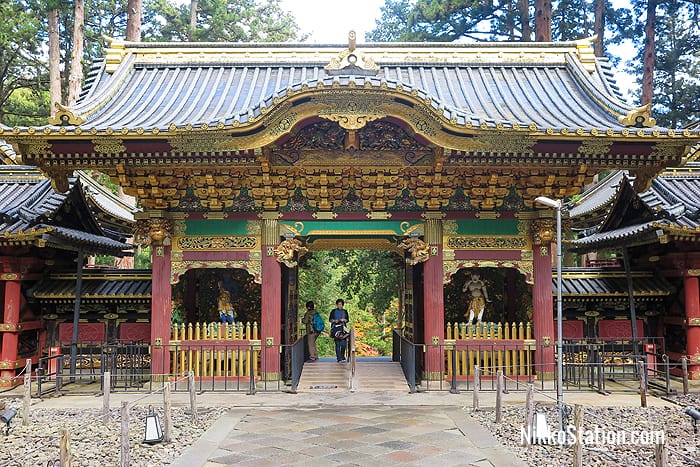 A reverse view of the Yashamon 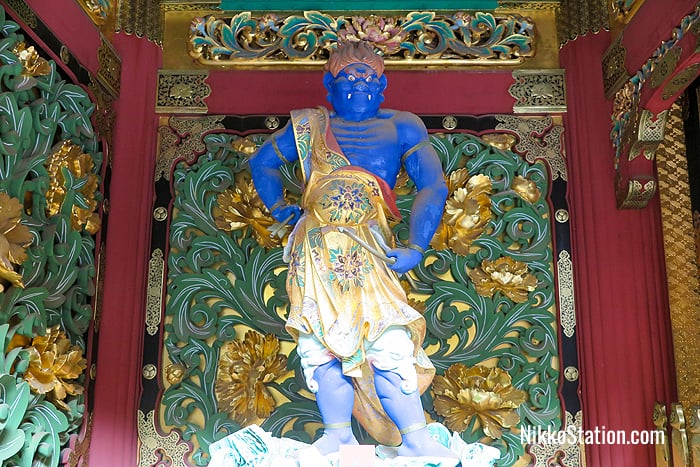 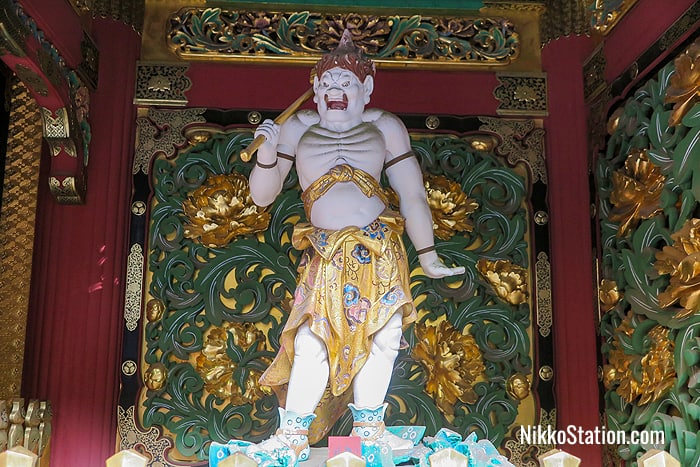 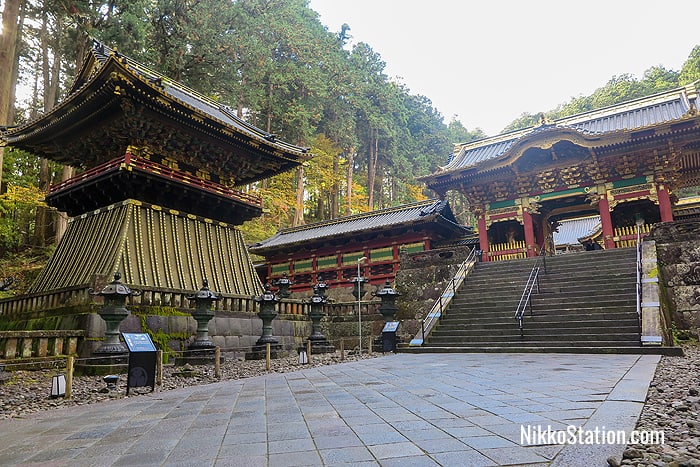 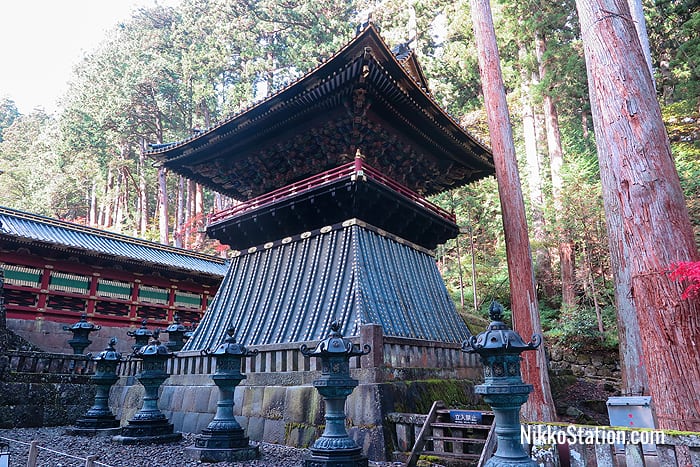 After viewing the two towers you will come to the Karamon which is decorated with gold leaf and has two cranes and a white dragon carved over the entrance. 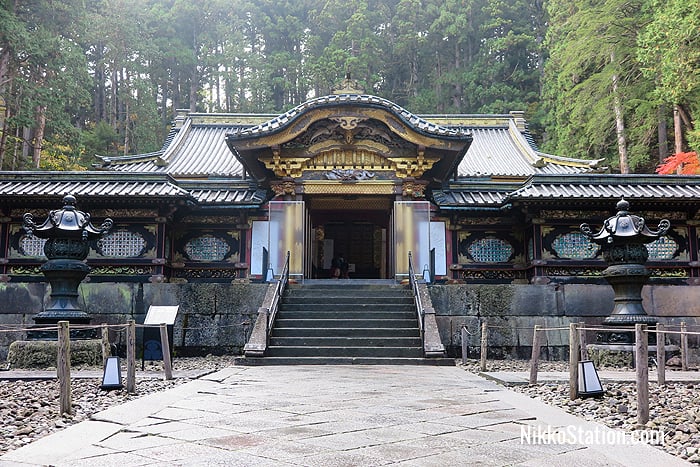 The Karamon leads to the Haiden or Worship Hall which is directly connected to the Honden or Main Hall of the temple by a connecting passageway. These buildings are the main structures of Taiyuin and together are a designated National Treasure. Visitors can pray at the Haiden but the Honden is not open to the public. You can however, walk around and admire the Honden from the outside. 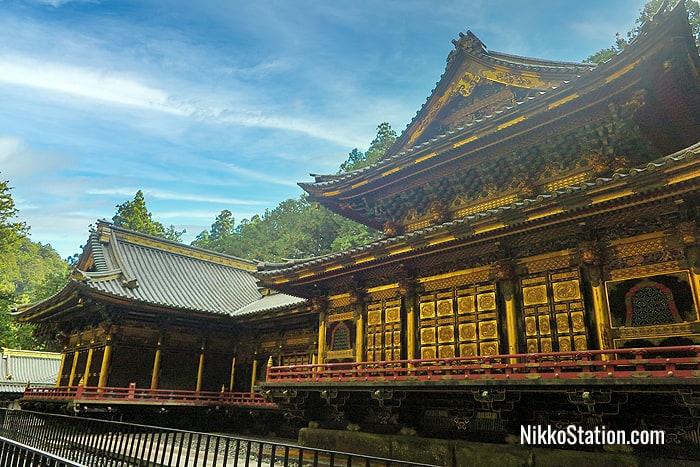 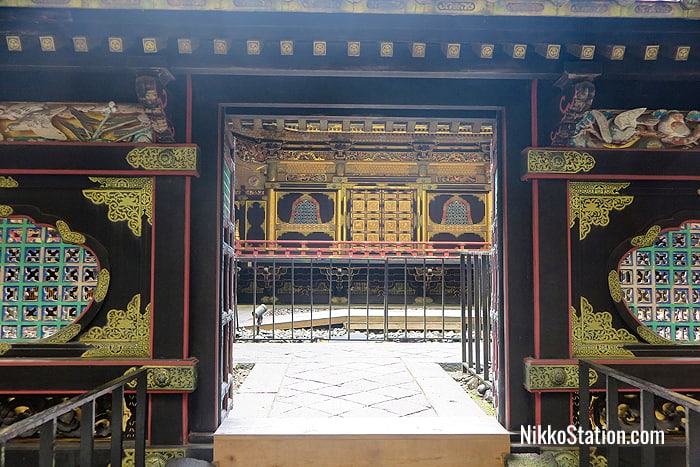 Looking into the main buildings of Taiyuin

Beside these main structures is another gate called the Kokamon which is kept closed. Behind this gate is the grave of Tokugawa Iemitsu. The Kokamon. Behind this gate is the grave of Tokugawa Iemitsu. 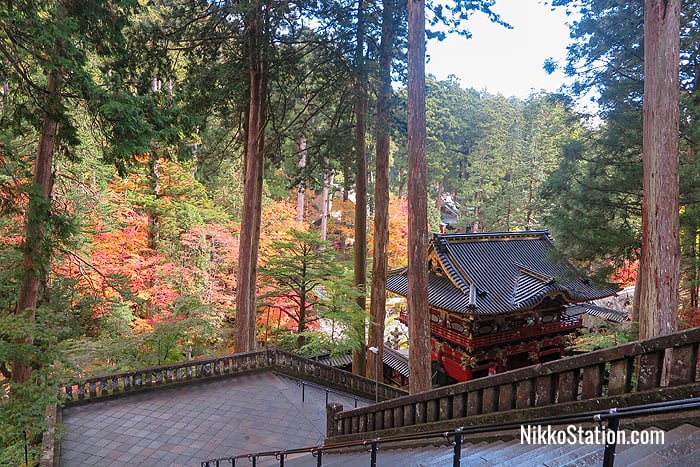 Taiyuin is located beside Futarasan Jinja Shrine and is also convenient for the other main sightseeing attractions in Nikko: the Toshogu Shrine and Rinnoji Temple. From the JR or Tobu Nikko stations it would take around 40 minutes to walk, but a bus will take you from either station to Taiyuin in around 15 minutes.