Rinnoji Temple is a large Buddhist temple complex in central Nikko. Together with the nearby Toshogu Shrine and Futarasan Jinja Shrine, this temple is one of the Shrines and Temples of Nikko UNESCO World Heritage Site. 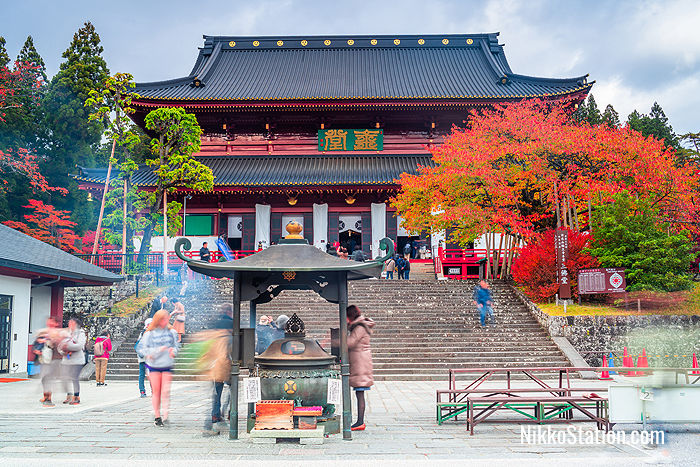 On the grounds of Rinnoji Temple

A temple was first established at this location by the monk, Shodo Shonin in the year 766. Shodo Shonin also established nearby Futarasan Jinja and Chuzenji Temple in Oku-Nikko and for this reason he is regarded as the founder of Nikko. 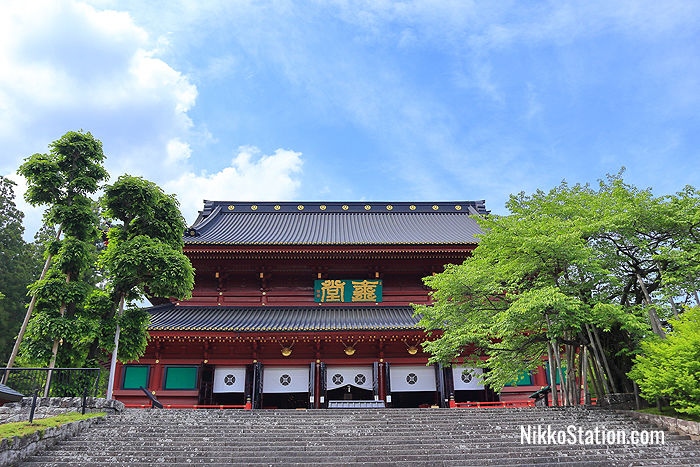 The most important building in the temple complex is the Sanbutsudo, which is the main hall of Rinnoji Temple. This is the largest wooden building in the Nikko area and the largest wooden building in eastern Japan. First built during the Heian era (794 – 1185) the current building dates from 1645. Inside this building are three great Buddha statues which are 7.5 meters high and covered in gold leaf. These represent Amida Nyorai (the Buddha of Infinite Light), Senju Kannon (the Thousand Armed Goddess of Mercy), and Bato Kannon (the Horse-Headed Kannon, Protector of Animals). 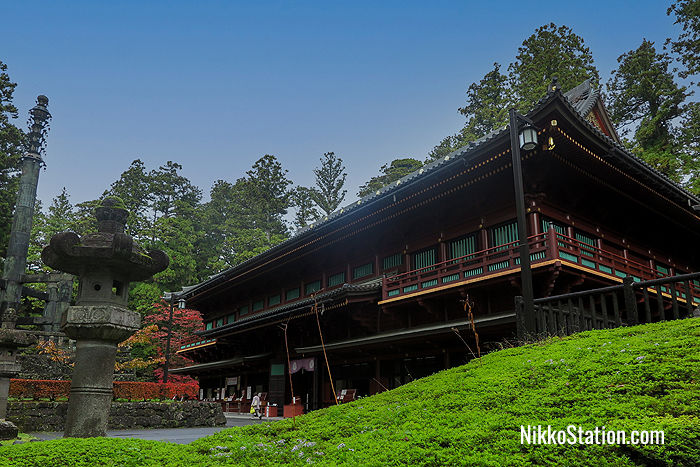 Activities in the Prayer Hall

Behind the Sanbutsudo is the Daigomado which is the temple’s prayer hall. A special fire ceremony is held in this hall which involves burning wooden prayer sticks in a sacred fire. This purification ceremony is held three times a day at 7.30, 11.00 and 14.00 and takes around 50 minutes. If you would like to join the ceremony you should go to the hall’s reception desk 10 minutes before the ceremony begins and pay a fee. Prayer fees start at 3,000 yen.

Sutra copying experiences can also be joined on the second floor of this hall between 9.00 and 15.00 (until 14.00 between November and March). Normally the verses that are copied are from the Heart Sutra, but this has 276 characters, so for beginners and overseas visitors shorter verses are prepared from the Hongakusan (“Hymn to Original Enlightenment”) which has just 59 characters. Copying the verses can take between 30 minutes to an hour and a half, and the fee for the experience is 1,000 yen for adults and 800 yen for children of junior high age or younger. The sutra copying experience is not available on the following dates: January 1-7, February 3rd, April 2nd, the last day of Golden Week (in May), September 14th and on any day when a special Buddhist memorial service is being held. 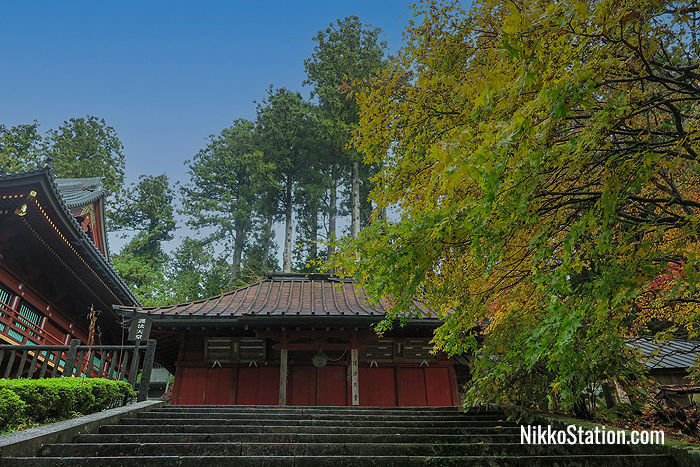 Beside the Daigomado is the Gohotendo. Dating from 1600 this is believed to be the oldest structure on the grounds of Rinnoji and is a registered Important Cultural Monument. When a major fire in 1872 destroyed all the surrounding buildings in the Rinnoji Temple complex, only the Gohotendo survived. Originally the lucky gods Bishamonten, Daikokuten, and Benzaiten were enshrined here, but they were later moved to the Daigomado. While the Sanbutsudo was considered a place to pray for universal well-being, the Gohotendo was a place to pray for your own personal needs. 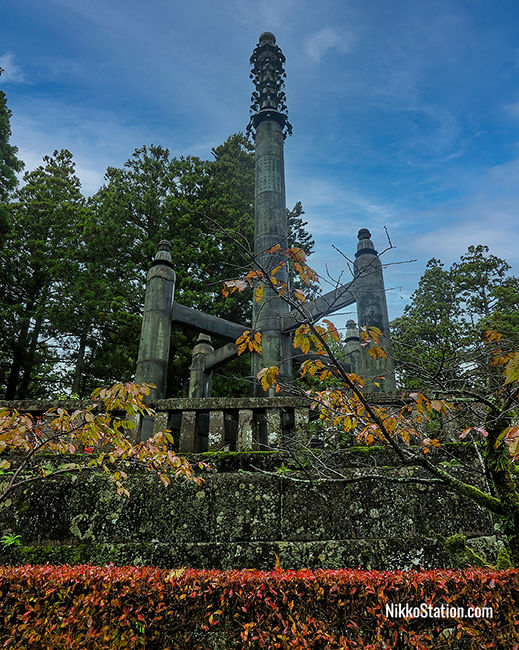 Close by the Gohotendo is an unusual bronze pagoda resembling a rocket ship which is called the Sorinto. Dating from 1643 this is another nationally registered Important Cultural Monument. Sacred scriptures are enshrined inside this pagoda which was placed here to protect the temple grounds from evil influences. There are only three such pagodas like this in Japan, the other two being located at Daijiji Temple in Tochigi Prefecture and Enryakuji Temple in Shiga Prefecture. There are two bronze lanterns on either side of the pagoda which were donated by the silk merchants of Edo, Osaka, and Nagasaki in 1648. 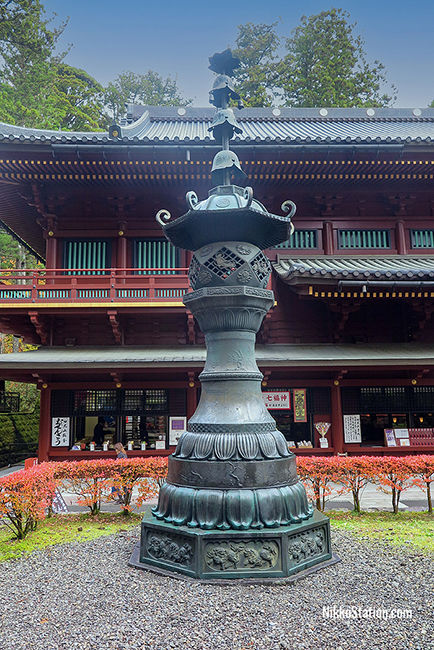 A bronze lantern by the Sorinto

The images decorating the bronze lanterns are believed to be based on sketches by the artist Kano Eitoku (1543 –1590) and feature fanciful elephants which appear to have been drawn from written descriptions rather than having been drawn from life. 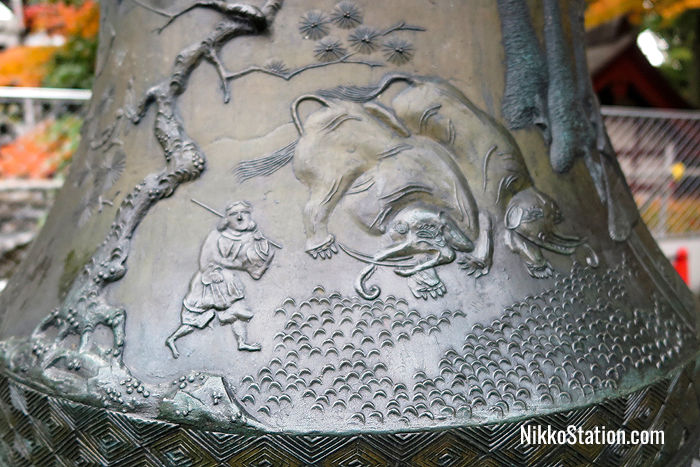 A detail of the elephants on one of the bronze lanterns 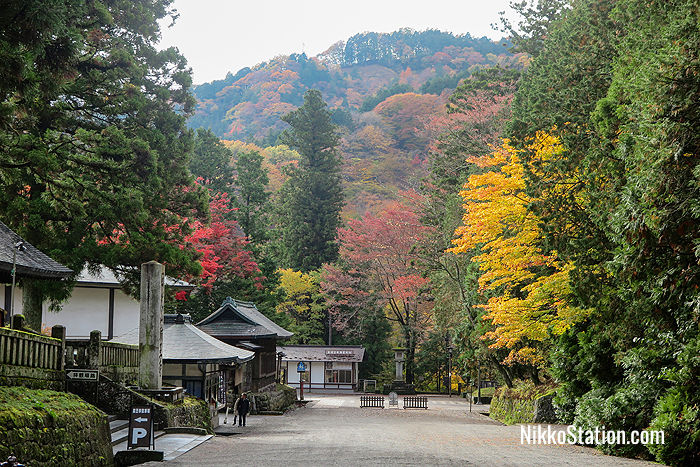 The entrance to the temple grounds

The grounds of Rinnoji Temple are free to enter, but admission fees are required for the Sanbutsudo, the Treasure House and the Shoyo-en garden. Rinnoji Temple also manages the Taiyu-in Mausoleum, so combined tickets are available that cover the cost of both the temple’s Sanbutsudo and the mausoleum.

Rinnoji Temple is a short walk from the Toshogu and Futarasan Jinja shrines in central Nikko. Taking a bus from either the JR or Tobu Nikko stations should take between 12 – 15 minutes while walking the same distance would take around 30 – 35 minutes.