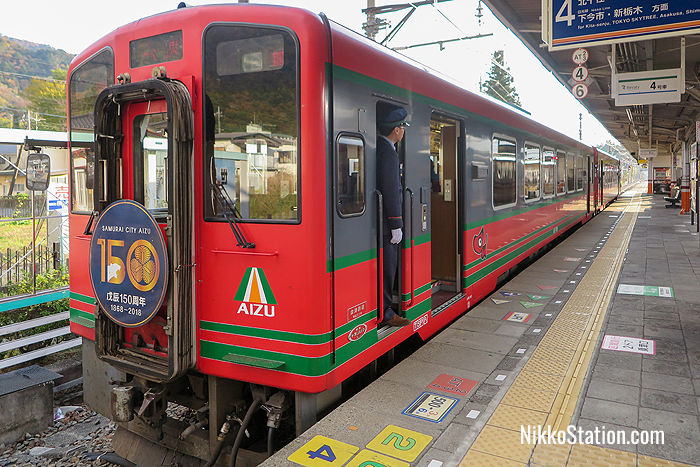 The Aizu Mount Express travels mainly over private rail lines so it is not covered by the Japan Rail Pass. However, although it is an express train, it requires no additional surcharge or reservations and can be used by simply paying the base fare for the journey.

The following stations are served by the Aizu Mount Express. Please note that service number #1 starts at Kinugawa-Onsen Station, and service number #2 terminates there. Stations in brackets () are not served by all trains. Shiokawa Station and Kitakata Station are only served by services #1 and #6 on weekends and national holidays.

The key destinations are listed below with rail fares and example journey times given from Tobu Nikko Station.

Nikko is famous for its scenic mountain setting and for its many temples and shrines. The most famous shrine is the Toshogu, which was built in the 17th century to honor the spirit of shogun Tokugawa Ieyasu. Nikko is also the departure point for the Oku-Nikko district which is known for its waterfalls, hot spring spas, and the resort area around Lake Chuzenji.

Tobu World Square is an architectural theme park with over 100 scale models of famous buildings from around the world. These models include 45 UNESCO World Heritage Sites and several working model railways.

Kinugawa Onsen is a hot spring spa resort town with many traditional hotels located along the scenic gorge of the Kinugawa River. Boat trips on this river can be taken from April till November and there is a ropeway cable car to an observation point on Mount Maruyama. Kinugawa Onsen is also convenient for the Edo Wonderland amusement park. This park recreates the architecture and culture of Japan’s Edo era (1603 – 1868) and features colorful parades, ninja workshops, and seasonal festivities. Edo Wonderland is a 15 minute bus ride from Kinugawa-Onsen Station.

This station is located further up the Kinugawa River from Kinugawa-Onsen Station and is convenient for some resort hotels and for the outdoor bath of Kinugawa Koen Iwaburo and the doll museum of Nikko Ningyo Bijutsukan.

Ryuokyo is the name of a spectacular ravine which is in walking distance of Ryuokyo Station. It is a popular hiking location which is known for its natural beauty, and is especially popular in the autumn foliage season.

Kawaji Onsen is a hot spring spa resort located still further up the Kinugawa River with many open air baths set along the river banks. The spa’s natural mineral waters are believed to have many health benefits including easing muscle ache and the pain of rheumatism and neuralgia. Iwaiyado Juan is a popular resort hotel in Kawaji Onsen which offers traditional ryokan inn style hospitality and luxury facilities at reasonable prices. 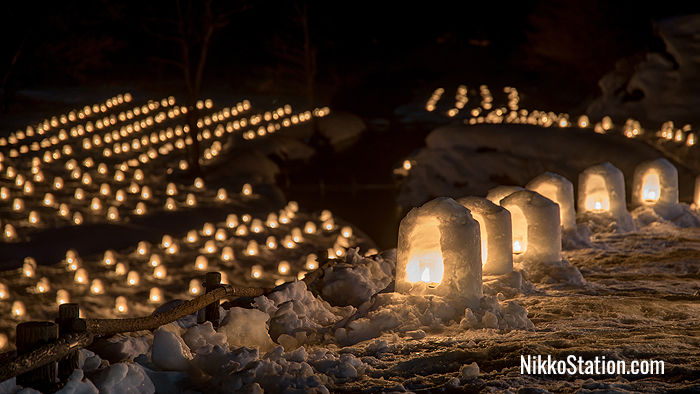 Yunishigawa Onsen is another hot spring resort town with open air baths, as well as thatched-roof houses. The town is known for its tradition of cooking wild game such as venison and wild boar in a sunken hearth. During the Yunishigawa Kamakura Festival, which lasts from late January to early March, many snow huts are built here and illuminated with candles. The historic Honke Bankyu is a popular ryokan inn which first opened here beside the Yunishigawa River in 1666. This hotel offers traditional open hearth cuisine, river-side bathing, and private open-air baths where you can unwind in a beautiful natural setting. 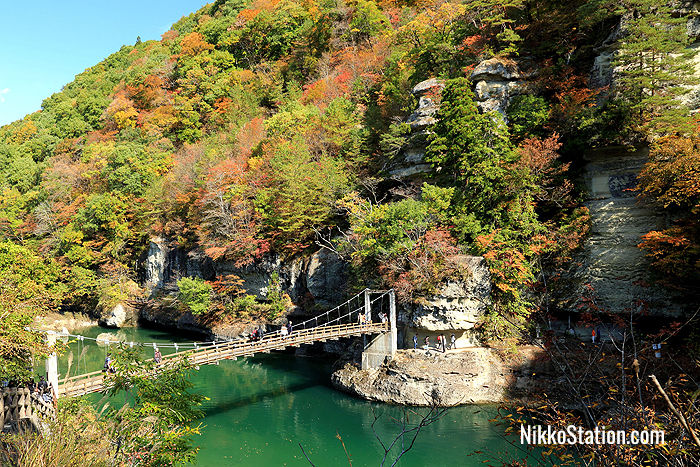 The spectacular cliffs of To-no-Hetsuri

To-no-Hetsuri is a dramatic rock formation of towering cliffs along a scenic river gorge. The area features a small shrine, a suspension bridge and an observation point and can be reached on foot from the station in just ten minutes.

Exit here for the preserved preserved Edo era post town of Ouchi-Juku which is just a 10 minute taxi ride from the station. Ouchi-Juku features streets of traditional thatched-roof buildings which are used to house souvenir shops, guest houses, and soba noodle shops. Yunokami-Onsen Station itself also has a thatched roof, along with a hot spring foot bath, and an open hearth inside which passengers can use to keep warm while they wait for their trains. 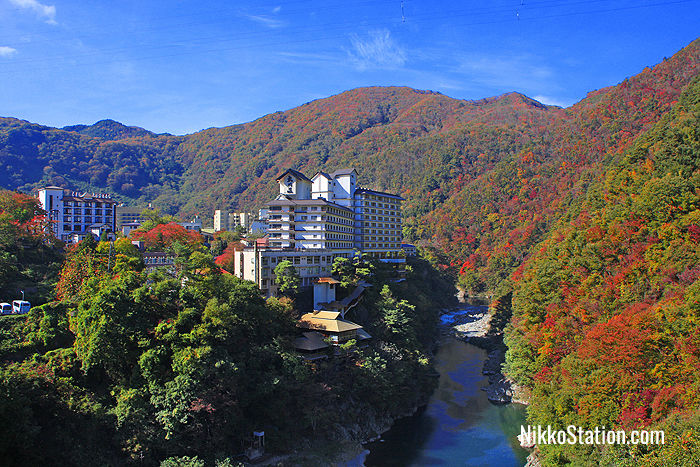 This station serves the hot spring resort town of Ashinomaki Onsen. There are many traditional hotels here with open air baths, and a dramatic mountain setting. The popular ryokan Ookawaso is recommended for its excellent service, traditional shamisen performances, and cliff-top bathing facilities with stunning views over the Ookawa valley. Ookawaso is a 10 minute ride by free shuttle bus from Ashinomaki-Onsen Station. The station itself is also famous for its official Station Master cat whose name is “Love”. 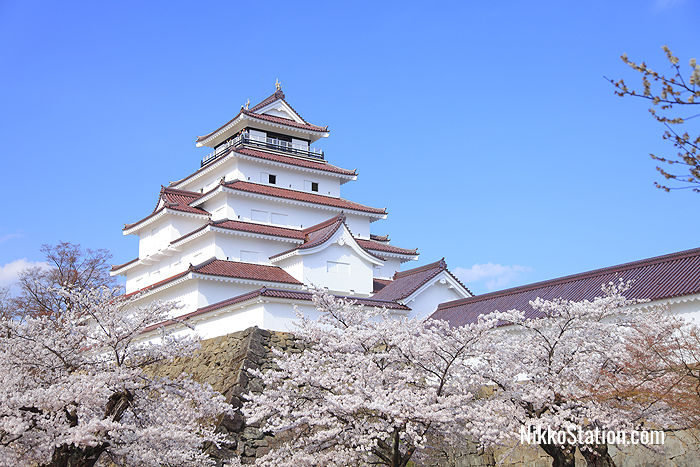 Aizu-Wakamatsu is a historic castle town and the main city of the Aizu region. The major attraction in Aizu-Wakamatsu is Tsuruga-jo Castle, which is famous for its white walls and red-tiled rooftops and is particularly pretty in the cherry blossom season. Other attractions include the scenic stroll garden of Oyakuen, the reconstructed samurai dwelling and gardens of Aizu Bukeyashiki, and the hexagonal temple of Sazae-do Temple which dates from 1796 and is nationally designated Important Cultural Property.

On the outskirts of Aizu-Wakamatsu is the hot spring resort of Hiagshiyama Onsen where you can enjoy river-side bathing in a gorgeous valley setting. Two recommended hotels here are Mukaitaki where you can enjoy the beautiful architecture of this traditional wooden ryokan-style inn, and Harataki which is well-known for its gourmet cuisine and riverside dining. As the main regional center, Aizu-Wakamatsu is also very well-connected and a good base from which to explore this part of Tohoku. Taking the JR Banetsu West Line from Aizu-Wakamatsu Station you can travel east to Lake Inawashiro, the five colored lakes of Goshikinuma, and the hot spring resort town of Bandai Atami. The Tadami Line on the other hand follows a scenic route west to Niigata Prefecture. 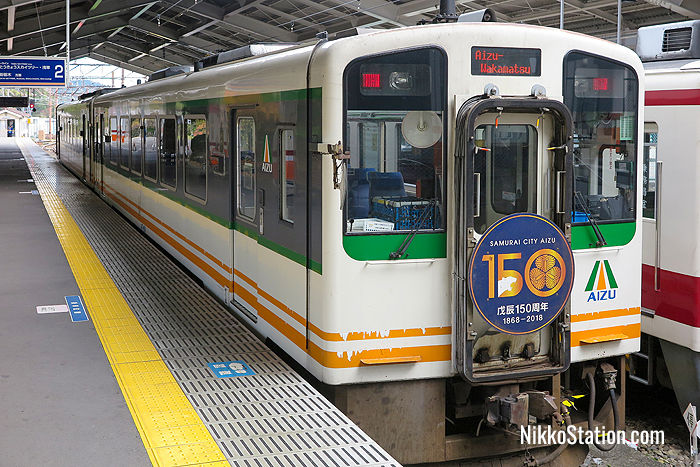 An AT-600 series train at Tobu Nikko Station 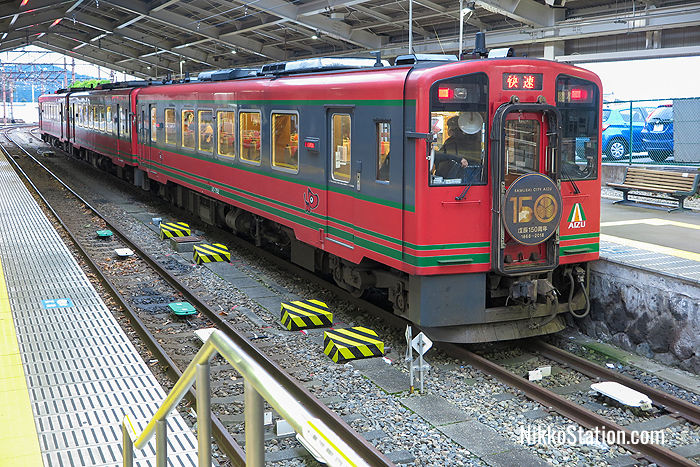 An AT-700 series train at Tobu Nikko Station 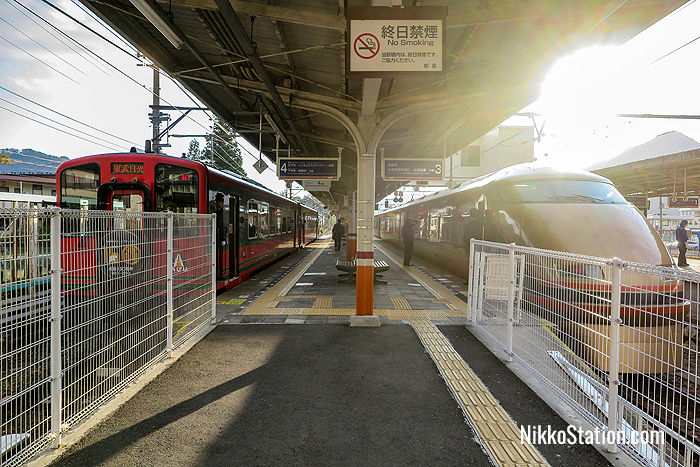 Aizu Mount Express services are timed so that they connect with Tobu Railway limited express services which are travelling to and from Tokyo. This means you can easily travel between Tokyo and Aizu-Wakamatsu with only one transfer. Most Aizu Mount Express services connect with limited express services bound to or from Tobu Asakusa Station in Tokyo. However, the inbound #6 service from Aizu-Wakamatsu connects with a Spacia Kinugawa service which is bound for JR Shinjuku Station in Tokyo. Please also note that although most transfers are at Kinugawa-Onsen Station, one outbound transfer takes place at Shimo-Imaichi Station. The full list of transfer times and locations is given below.

An alternative to the Aizu Mount Express is the Tobu Railway’s limited express Revaty Aizu service which runs all the way between Tobu Asakusa Station and Aizu-Tajima Station via Kinugawa Onsen. At Aizu-Tajima Station passengers then board a relay train that takes them to Aizu-Wakamatsu.

To plan journeys between individual stations on the Aizu Mount Express route and other destinations we recommend using English language route finders such as Hyperdia or the Japan Transit Planner.