The Revaty Aizu is a limited express service operated by Tobu Railway that runs between Tobu Asakusa Station in Tokyo and Aizu-Tajima Station in Fukushima Prefecture. The train stops at Kinugawa-Onsen Station on the way, so it provides a fast link between three major tourist destinations: Tokyo, the Kinugawa Onsen resort area in Tochigi Prefecture, and the scenic Aizu region which is famous for its mountains and lakes, hot spring spas, and ski resorts. 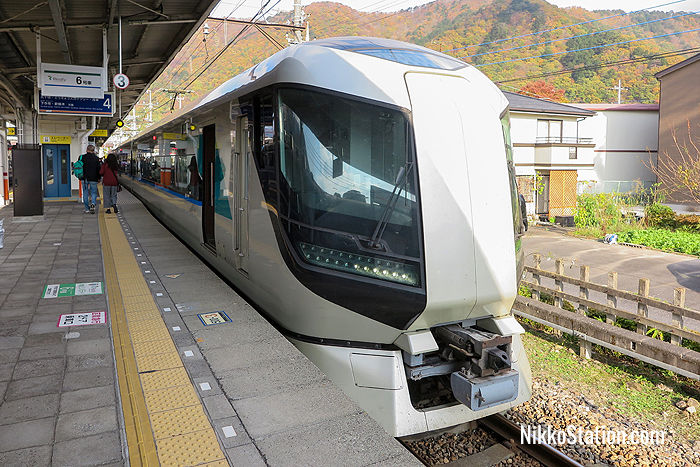 Because Tobu Railway is a private railway company, the Revaty Aizu is not covered by the Japan Rail Pass. However, Tobu Railway have their own discount system for international tourists. All seats on this service must be reserved in advance, and you will have to pay a limited express surcharge as well as paying for your train ticket.

Revaty Aizu services are coupled with Revaty Kegon services between Tobu Asakusa and Shimo-Imaichi stations and make limited stops at the following stations. Stations in brackets () are not served by all services.

To read about the key destinations between Tobu Asakusa and Shimo-Imaichi, please see our article on the Revaty Kegon. Beyond Shimo-Imaichi Station the Revaty Aizu stops at the following stations. Not all services stop at the stations in brackets ().

The key destinations and transfer points between Shimo-Imaichi and Aizu-Tajima stations are listed below. Rail fares (including limited express surcharges) and example journey times are given from Tobu Asakusa Station. 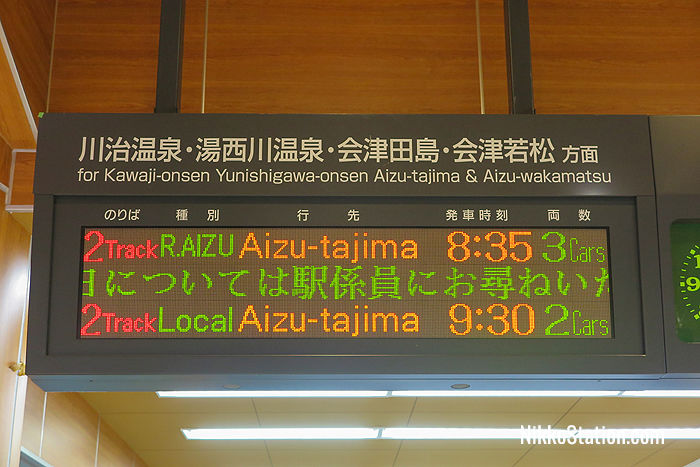 This station serves the architectural theme park of Tobu World Square which has 102 scale model replicas of famous buildings from all over the world including 45 UNESCO World Heritage Sites. Please note that two Revaty Aizu services do not stop at this station. These are the outbound service #101 and inbound service #148.

Kinugawa Onsen is a hot spring resort town with traditional hotels located along a scenic mountain valley. Boat trips on the Kinugawa River can be taken from April till November and there is a ropeway cable car to an observation point on Mount Maruyama. This location is also convenient for the Edo Wonderland amusement park. Edo Wonderland recreates the architecture and culture of Japan’s Edo era (1603 – 1868) in an immersive experience that includes colorful parades, ninja workshops, and seasonal festivities. The amusement park is a 15 minute bus ride from Kinugawa-Onsen Station.

Ryuokyo means “Dragon King Valley” and is the name of a scenic ravine which is in walking distance of Ryuokyo Station. This a popular hiking location and is known for its spectacular views, and it is particularly beautiful in the autumn foliage season.

Kawaji Onsen is another hot spring resort town on the Kinugawa River with many open air baths set along the river banks. The mineral waters here are said to have many health benefits and be particularly good for easing muscle ache and the pain of rheumatism and neuralgia. Iwaiyado Juan is a popular resort hotel in Kawaji Onsen offering traditional ryokan inn style hospitality and luxury facilities at affordable prices.

Yunishigawa Onsen is a hot spring resort town which also has open air baths, as well as traditional thatched-roof houses, and it is well known for its rural cuisine which includes venison and wild boar traditionally cooked in a sunken hearth. From late January to early March the Yunishigawa Kamakura Festival is held here and many snow huts are built which are illuminated with candles in the evenings. Honke Bankyu is a popular ryokan inn set beside the Yunishigawa River which was first opened in 1666. This hotel offers traditional open hearth cuisine, river-side bathing, and private open-air baths where you can fully relax in a beautiful setting.

Aizu-Tajima Station is the northern terminus of the Revaty Aizu service. From here passengers can transfer to Aizu Line services bound for the town of Aizu-Wakamatsu which is one of the major sightseeing destinations in the Aizu region. The relay train for Aizu-Wakamatsu departs just a few minutes after the Revaty Aizu arrives at Aizu-Tajima. It takes a little over 70 minutes and costs 1,660 yen.

Here are three of the top tourist destinations in Aizu that can be reached easily from Aizu-Tajima Station. 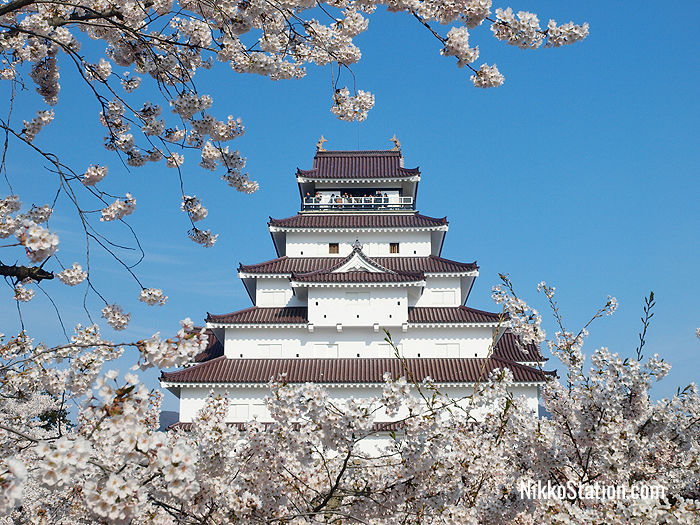 Tsuruga-jo Castle in the spring

Aizu-Wakamatsu is a castle town famous for its samurai history and traditions. Its attractions include:

Aizu-Wakamatsu is also a good base from which to explore the rest of the Aizu region because the station is well-connected with services on three train lines. On the JR Banetsu West Line you can travel east to Lake Inawashiro, the five colored lakes of Goshikinuma, and the hot spring resort town of Bandai Atami. The Tadami Line follows a scenic route west to Niigata Prefecture. The Aizu Line runs north to south through the Aizu region and connects Aizu-Wakamatsu with the hot spring resort towns of Ashinomaki Onsen and Yunokami Onsen. 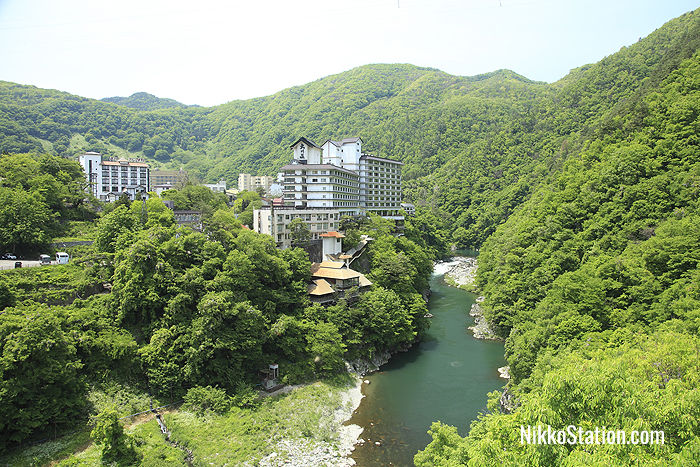 Ashinomaki Onsen is a hot spring resort town with open air baths set in stunning mountain scenery. Among the many traditional spa hotels here Ookawaso is popular for its excellent service, traditional shamisen performances, and cliff-top bathing facilities with dramatic views over the Ookawa valley. Ookawaso is a 10 minute ride by free shuttle bus from Ashinomaki-Onsen Station on the Aizu Line. The station itself is also famous for its official Station Master: a cat named “Love”. 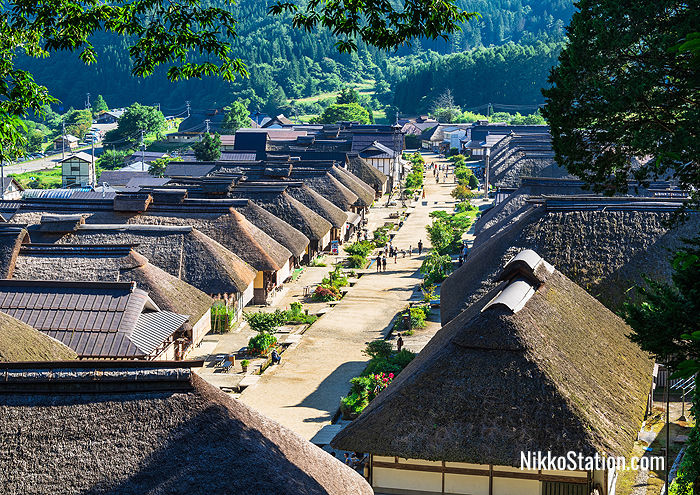 The thatched roofs of Ouchi-Juku

Ouchi-Juku is a preserved Edo era post town with a large number of traditional thatched-roof buildings which are now home to souvenir shops, guest houses, and soba noodle shops. The town is a 10 minute taxi ride from Yunokami-Onsen Station on the Aizu Line. The station building is also notable for having a thatched roof, a hot spring foot bath, and an open hearth inside to keep passengers warm while they wait for their trains. 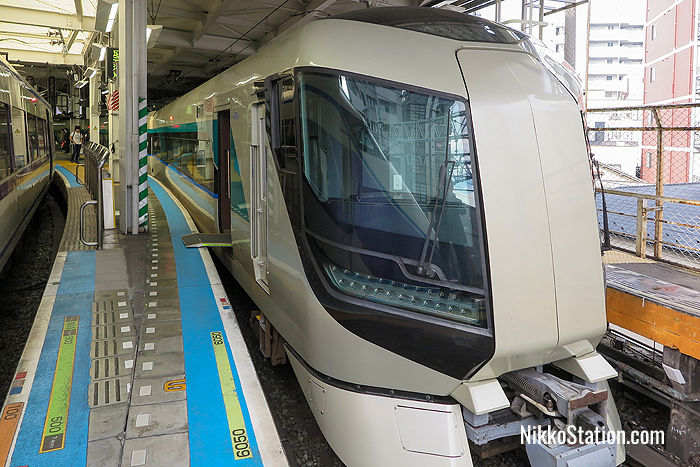 The Revaty Aizu is a three-car Tobu #500 series train with 161 seats. The train is completely non-smoking. Cars are lit with LED lighting and each seat has its own power outlet. Wi-Fi is available throughout the train. There are spaces for wheelchairs and washrooms accessible for wheelchair users. 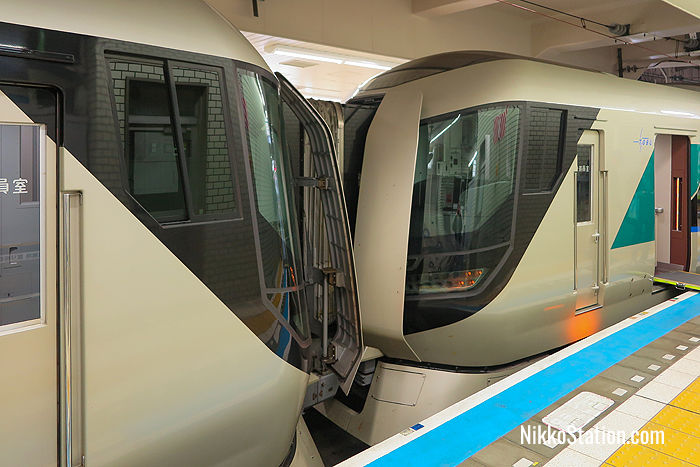 The Revaty Aizu is one of a series of Revaty services operated by Tobu Railway. The Revaty train series won the Laurel Prize for its design in 2018, and its sleek appearance has made it popular with both rail travelers and train enthusiasts. One of the chief features of the Revaty series is that trains bound for separate destinations can be coupled together for part of their route, and decoupled on the way. For this reason, if you are boarding the Revaty Aizu at Tobu Asakusa Station, you should be careful to get on the right part of the train. However, carriages are clearly marked, so this should not be a problem. 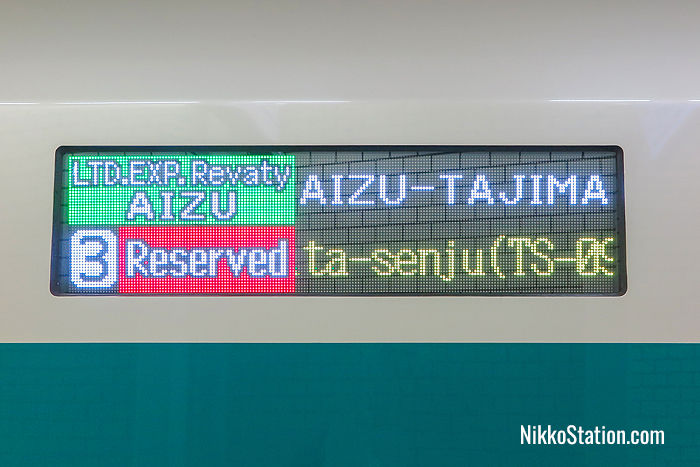 There are four return Revaty Aizu services that run between Tobu Asakusa Station and Aizu-Tajima Station each day.

Tobu Railway lines are not covered by the Japan Rail Pass, but Tobu does have its own system of discount passes for international travelers. Special passes are offered that cover the Aizu area and also for the Nikko area which includes Kinugawa Onsen. To find out more please visit the official Tobu Railway website. 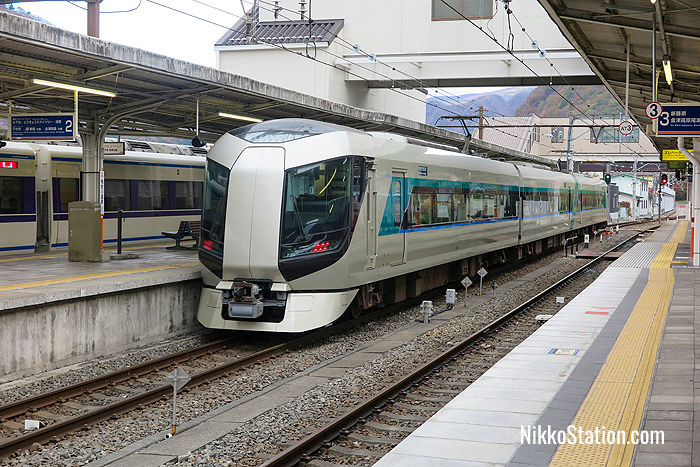 Alternatives to the Revaty Aizu

Travelers wishing to use the Japan Rail Pass to travel to the Aizu region, should take the Tohoku Shinkansen line from either Tokyo Station or Ueno Station. The shinkansen can take you from Tokyo Station to Koriyama Station in 1 hour and 20 minutes. From Koriyama you can then transfer to the JR Banetsu West Line for Aizu-Wakamatsu.