The Tobu Kinugawa Line runs between Shimo-Imaichi Station and Shin-Fujiwara Station in Tochigi Prefecture. The line is named after the scenic Kinugawa River and for part of its route the line follows that river’s course. 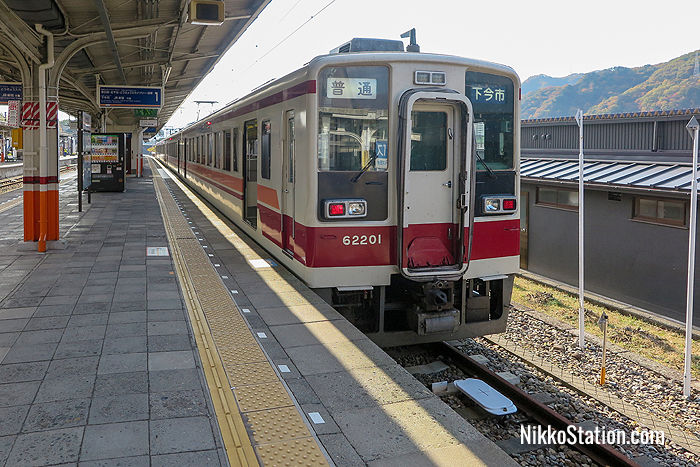 The Tobu Kinugawa Line branches off from the Tobu Nikko Line at Shimo-Imaichi Station and at Shin-Fujiwara Station it connects with Yagan Railway’s Aizu Kinugawa Line. For this reason a variety of through services use this line when traveling between Tochigi Prefecture and the Aizu region of Fukushima Prefecture. This line is operated by the private company, Tobu Railway, and so it is not covered by the Japan Rail Pass.

There are nine stations on the Tobu Kinugawa Line. These are as follows.

The main attractions on this line are the theme park at Tobu World Square and the hot spring resort of Kinugawa Onsen. Passengers traveling from Nikko to Kinugawa Onsen should take the Tobu Nikko Line south to Shimo-Imaichi and then take a northbound train on the Tobu Kinugawa Line. The key destinations are listed below with example fares and journey times for local trains given from Shimo-Imaichi.

This station serves the town of Imaichi which has a small number of shrines and temples which are of historic interest. Hotoku Ninomiya Shrine is a 3 minute walk from the station and is dedicated to a 19th century farming reformer, called Ninomiya Sontoku, who lived in the town of Imaichi at the end of his life. The Buddhist temple, Nyoraiji, which was established in the 15th century, is a 7 minute walk from Shimo-Imaichi Station and Takio Shrine, which was founded by the legendary monk Shodo Shonin in 782 and is also a 15 minute walk from the station.

Shimo-Imaichi is the transfer point between the Tobu Kinugawa Line and the Tobu Nikko Line. Northbound services on the Tobu Nikko Line run to Nikko and southbound services run to Tobu Dobutsu Koen. On weekends and holidays there is a special steam locomotive service between Shimo-Imaichi Station and Kinugawa-Onsen Station which is called the SL Taiju. Both stations have turntables where you can see the SL Taiju being turned around for its next journey.

This station provides direct access to the Tobu World Square architectural theme park which has over 100 scale models of the world’s most famous buildings and manmade structures including 45 UNESCO World Heritage Sites and several model landscapes with working model trains.

Kinugawa Onsen is a popular hot spring spa town with traditional inns and resort hotels perched over the dramatic gorge of the Kinugawa River valley. Activities here include boat trips on the river, a ropeway trip to see the monkeys at the top of Mount Maruyama, or simply soaking in a hot spring bath and enjoying the scenic view. This town is also a convenient base from which to visit the Edo Wonderland amusement park where you can see the recreated architecture and culture of the Edo era (1603 – 1868), dress up in period costumes, watch colorful parades and ninja shows.

This station is located further up the Kinugawa River from Kinugawa-Onsen Station and serves the same resort area. A small number of resort hotels are located closer to Kinugawa-Koen Station, so this station could be more convenient for some passengers. Nearby attractions include the outdoor bath of Kinugawa Koen Iwaburo and the doll museum of Nikko Ningyo Bijutsukan. 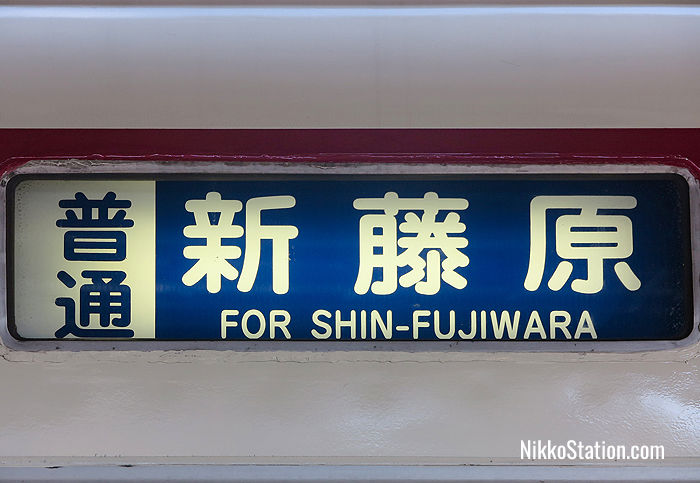 A carriage plate on a train bound for Shin-Fujiwara Station 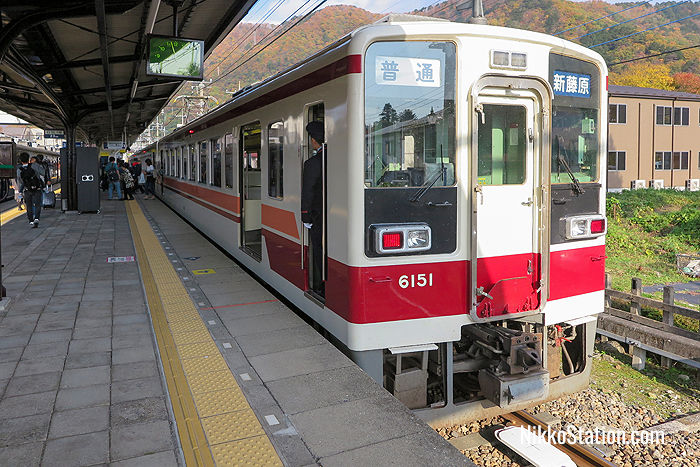 Although Tobu Railway lines are not covered by the Japan Rail Pass, Tobu do offer their own discount passes for international tourists. Special passes are offered that cover the Nikko and Kinugawa Onsen areas. To find out more please visit the official Tobu Railway website.

The official Tobu Railway website has downloadable route maps of all the Tobu lines. Use the Japan Transit Planner to find the trains that suit your schedule.