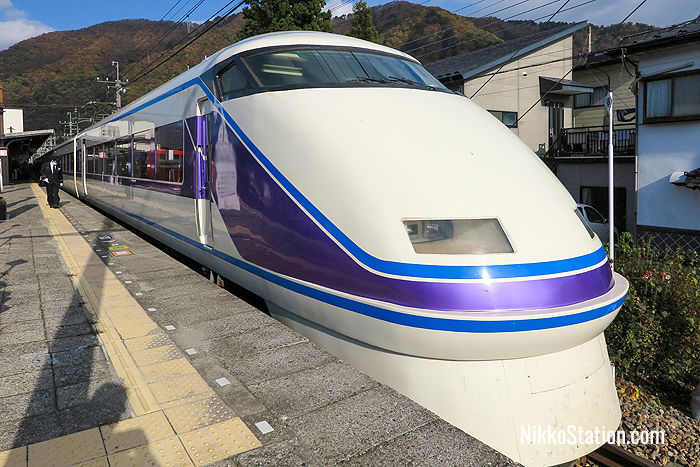 The Spacia Kinu at Kinugawa-Onsen Station

The Spacia Kinu makes stops at the following stations, but not all trains stop at Tobu World Square or Sugito-Takanodai stations. Only one inbound service starts at Shin-Fujiwara and makes a stop at Kinugawa-Koen. All other services start or terminate at Kinugawa-Onsen Station.

The key destinations and transfer points are listed below. Rail fares (including limited express surcharges) and example journey times are listed from Kinugawa-Onsen Station.

Kinugawa Onsen is a popular hot spring resort town with many fine traditional hotels set in a dramatic mountain gorge. Popular activities at Kinugawa Onsen include taking boat cruises on the Kinugawa River (from April till November) and taking the Ropeway cable car to the top of Mount Maruyama where there is an observation point and a small monkey park. Kinugawa Onsen is also convenient for the Edo Wonderland amusement park which is a 15 minute bus ride from the station. This theme park immerses visitors in the culture, life, and architecture of Japan’s Edo era (1603 – 1868). Edo Wonderland’s attractions include street shows, ninja workshops, seasonal festivals, and colorful parades.

Tobu World Square is an architectural theme park with 102 scale model replicas of famous buildings from all over the world including 45 UNESCO World Heritage Sites. Some of the models also have working train sets such as the Tokyo Station replica which has both a shinkansen and a regular JR train, and the Four Seasons of Japan display which is a diverse landscape featuring all of Tobu Railway’s most famous trains. The theme park is a 1 minute walk from Tobu World Square Station.

Transfers can be made here to the Tobu Nikko Line for services bound for Nikko.

Tochigi City is famous for the many historic wooden “kura” buildings in the Kuranomachi district. Popular attractions include the Tochigi Kuranomachi Museum of Art, the Tochigi Utamaro Museum which displays ukiyo-e prints by the artist Kitagawa Utamaro, and the Okada Memorial Museum which is a historic residence with many fine antiques and historic artifacts. Transfer at Tochigi Station to the JR Ryomo Line.

Exit here for Tokyo Skytree, the world’s tallest tower at 634 meters high. The Skytree is a major tourist destination with upper level observation decks and plenty of shopping and dining facilities. 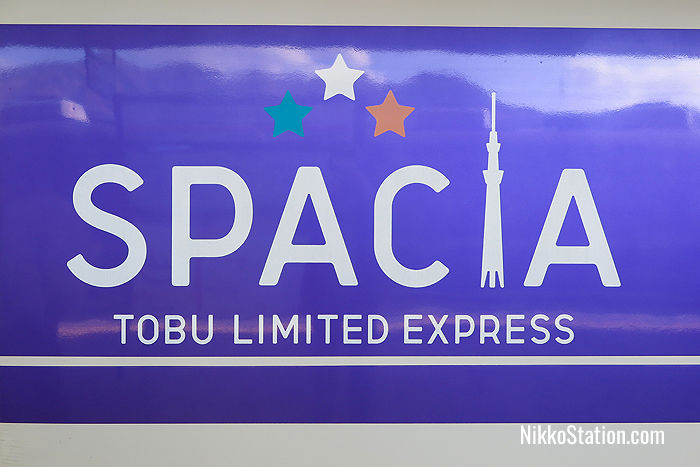 The Spacia logo includes an image of Tokyo Skytree

Asakusa is a major sightseeing destination in Tokyo. Among its chief attractions are ancient Sensoji Temple and the dramatic Kaminarimon gate, the old-fashioned fairground at Hanayashiki Amusement Park, the souvenir stalls on Nakamise shopping street, and the downtown atmosphere of the pubs on Hoppy Street. Transfers can be made in Asakusa to Toei Asakusa Subway Line, Tokyo Metro Ginza Line, and the Tsukuba Express Line.

On Board the Spacia Kinu

All cars on Spacia limited express trains are non-smoking and have free Wi-Fi internet service. In addition to regular seating there are also six private compartments which can seat up to four people. These compartments cost an additional 3,090 yen on weekdays and 3,700 yen on weekends and holidays. The Spacia has an on board trolley service selling drinks, sandwiches, bento-style lunch boxes, and Spacia-themed souvenirs. There is also a soft drinks vending machine in car 3. Some trains also have a kiosk in car 3 where you can buy drinks, snacks, and souvenirs. 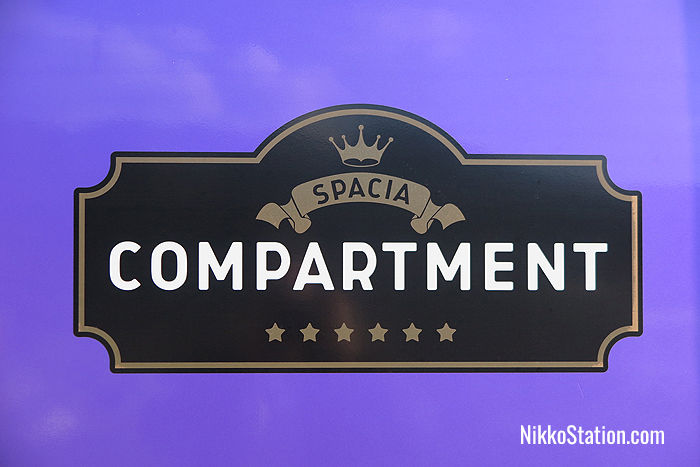 Seven Spacia Kinu services run from Kinugawa Onsen to Asakusa on weekdays, and eight services run on weekends and holidays. Please note that only four services stop at Tobu World Square Station: #120, #130, #138, and #142. Service #112 is unusual because it starts at Shin-Fujiwara Station at 7.13 and makes a stop at Kinugawa-Koen Station at 7.17 before arriving at Kinugawa-Onsen. This is the only Spacia Kinu service to stop at Shin-Fujiwara and Kinugawa-Koen stations.

Seven Spacia Kinu services run from Tobu Asakusa Station on weekdays, and eight services run on weekends and holidays. Please note that the last three services of the day do not stop at Tobu World Square Station.

Because Tobu Railway is a private company its lines are not covered by the Japan Rail Pass. However, Tobu does have its own system of discount passes for international tourists. Special passes are offered that offer discounts for the Kinugawa Onsen and Nikko areas and the journey between Kinugawa Onsen and Asakusa. To find out more please visit the official Tobu Railway website.

Alternatives to the Spacia Kinu

Tobu Railway operates two other limited express services that connect Kinugawa Onsen with Asakusa. The Revaty Kinu is a single inbound service that runs between Shin-Fujiwara Station and Tobu Asakusa Station. This train stops at Kinugawa Onsen but does not stop at Tobu World Square. There are also inbound and outbound Revaty Aizu services which run between Aizu-Tajima Station in Fukushima Prefecture and Tobu Asakusa Station. All Revaty Aizu services stop at Kinugawa Onsen, and some also stop at Tobu World Square.