Buses can be a good way to get around Nikko if the traffic is not too heavy. Tobu Bus run services between the station area in Nikko and all the major tourist sites. There are bus stops outside both the JR Nikko and Tobu Nikko stations with services headed for all the main tourist locations inside Nikko and also for the Oku-Nikko area. There are also a variety of bus passes available which make taking the bus very economical. 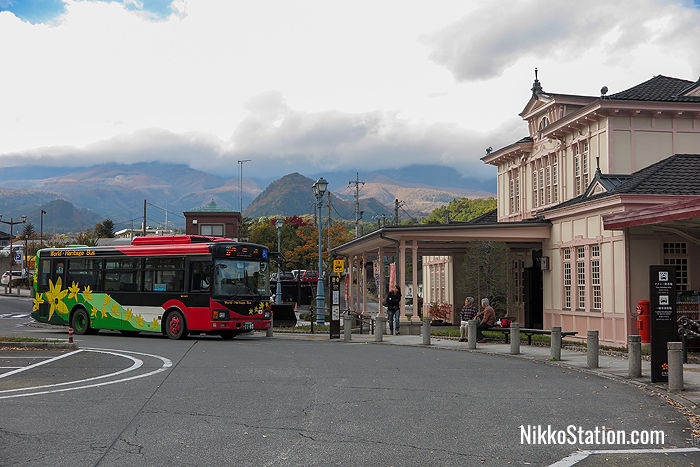 A bus at JR Nikko Station

There are three Tobu Bus stops outside JR Nikko Station. Bus stops 1A and 1B are located directly outside the station exit. Bus stop 1C is located across the road and a little further to the south of the station. Below are the services that run from these stops. 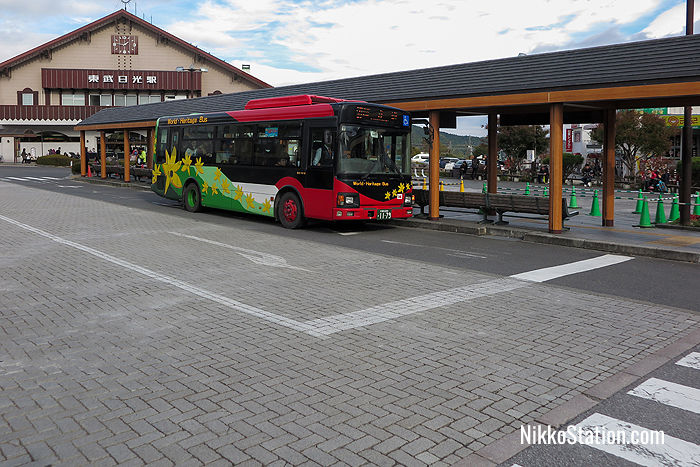 Bus stops 2A, 2B, and 2C are directly in front of Tobu Nikko Station 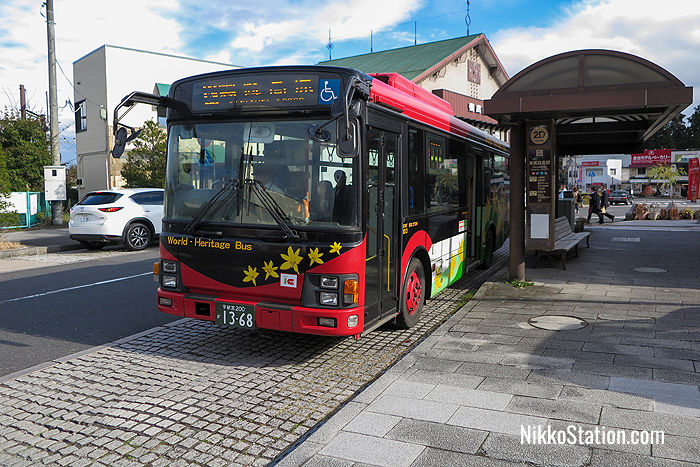 The main destinations are written on each bus stop in Japanese and English and there are timetables too. To visit the main sightseeing locations in central Nikko, such as the Shinkyo Bridge, Toshogu Shrine, and Futarasan Jinja Shrine, you can take the World Heritage Sightseeing Bus from stops 1B or 2B. 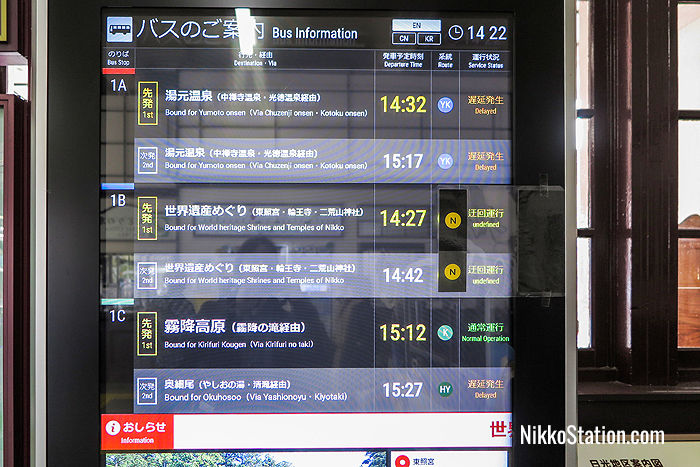 A bus can take you from Tobu Nikko Station to the Shinkyo Bridge in 5 minutes and to the Futarasan Jinja Shrine in 10 minutes. If you decide to walk the same distance it will take you around 15 minutes to reach the Shinkyo Bridge and 30 minutes to reach Futarasan Jinja Shrine. However, Nikko is a small town with narrow roads, and it is also a very popular sightseeing location. During peak tourist season, on national holidays and weekends, the road to the main tourist sites gets very busy. At such times it is actually quicker to walk for 30 minutes rather than sitting in a stationary bus. For this reason we recommend traveling to Nikko on weekdays and taking the bus in the early morning to avoid the crowds.

If you think you will use the bus system multiple times then getting a Tobu Bus Free Pass is a good idea.
With a free pass you can take unlimited bus rides for either one or two days within the area specified on your ticket. A variety of passes are available which cover different locations. The World Heritage Sightseeing Pass for example, is a one day pass that costs just 500 yen and can be used multiple times in Nikko’s main sightseeing area. This is actually cheaper than spending 620 yen on a return trip between the station and World Heritage areas. Free Passes can be bought from either JR Nikko Station Ticket Office or the Tourist Information Center in Tobu Nikko Station. Staff at the Tourist Information Center can also advise you on the best pass for the destinations that you wish to visit.

There are also discount tickets available from Tobu Railway that cover both the cost of your rail travel and bus fares in the Nikko and Kinugawa Onsen areas. To find out more visit the Tobu Railway website. 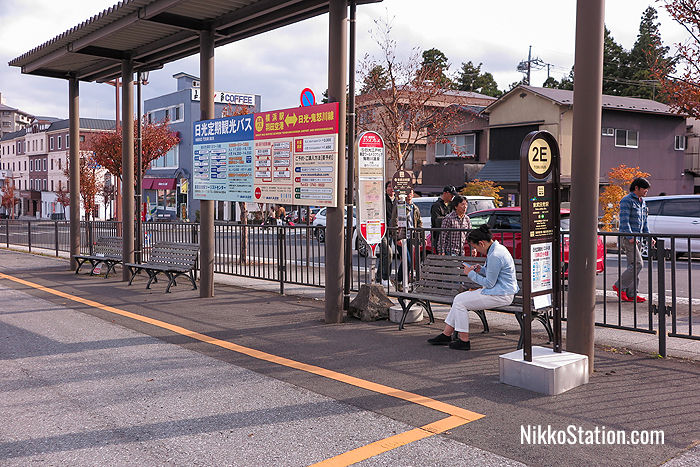 The easiest way to take in all the sights is to take a tour. The Nikko Tour Bus runs a one day sightseeing tour that takes in Nikko and Oku-Nikko’s major sights with a stop at Chuzenji Kanaya Hotel for lunch. The attractions on this tour include the Shinkyo Bridge, Chuzenji Temple, Toshogu Shrine, Rinnoji Temple, Futarasan Jinja Shrine, and the Kegon Falls. There is an audio guide on the bus and a local guide who accompanies you at the various stops. The bus departs from bus stop 2E outside Tobu Nikko Station at 10.00 and returns at around 16.45 (depending on traffic). A tour starting and finishing at Tobu Nikko Station will cost 7,600 yen for an adult and 4,300 yen for a child. This tour can be booked at the Tourist Information Center at Tobu Nikko Station.