The SL Taiju is a steam train service operated by Tobu Railway which runs between Shimo-Imaichi Station and Kinugawa-Onsen Station in the greater Nikko region of Tochigi Prefecture. This is a special sightseeing train that usually runs only on weekends and national holidays. There are 3 daily return services on these days, each of which lasts around 35 minutes. 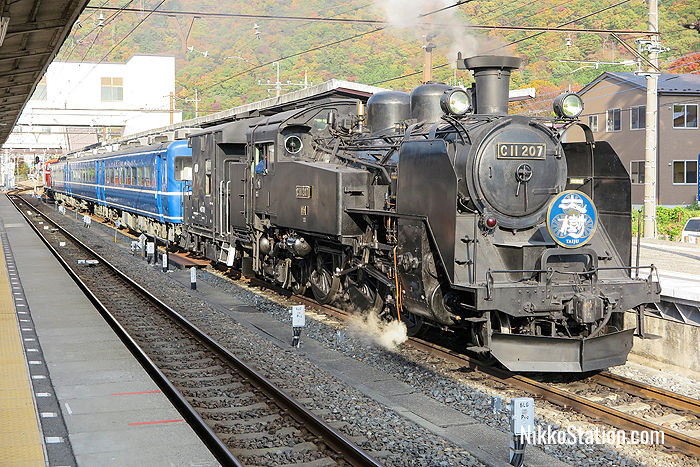 The SL Taiju at Kinugawa-Onsen Station

The SL Taiju is a revival of steam train travel by Tobu Railway and has been running since August 2017. Although steam trains were common on the Tobu Railway network in the past, Tobu’s last steam powered service finished in 1966. These new nostalgic steam train trips between Shimo-Imaichi Station and Kinugawa-Onsen Station have proved to be a very popular tourist attraction in the Nikko region.

There are just three stops on the SL Taiju’s route as it runs along the Tobu Kinugawa Line between Shim-Imaichi Station and Kinugawa-Onsen Station with one brief stop at Tobu World Square Station. The main attractions on this route are the theme park at Tobu World Square and the hot spring resort town of Kinugawa Onsen. As Shimo-Imaichi Station is the transfer station between the Tobu Nikko Line and the Tobu Kinugawa Line, passengers traveling either from the nearby town of Nikko or from Asakusa in Tokyo can transfer here to the SL Taiju for the last part of their journey to Kinugawa Onsen, and then arrive at their holiday destination in great style! 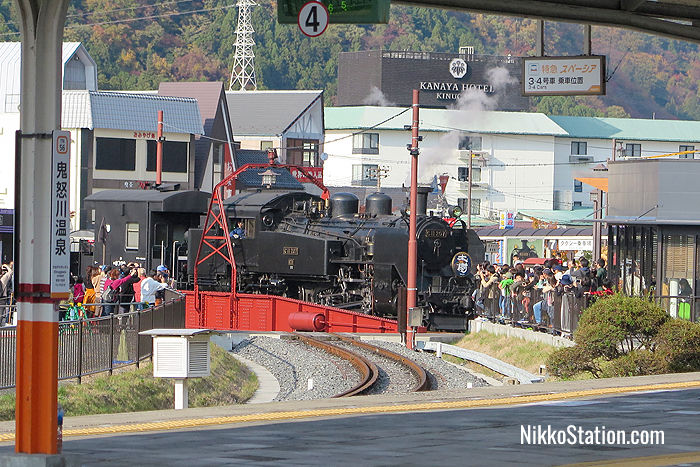 There are turntables at both Shimo-Imaichi Station and Kinugawa-Onsen Station where you can watch the steam locomotive being rotated for its next journey. The turning of the locomotive always draws big crowds and is fun to watch and photograph. In addition there is a small exhibition room at Shimo-Imaichi Station which has photographs, models and other exhibits related to the history of steam trains on Tobu Railways. 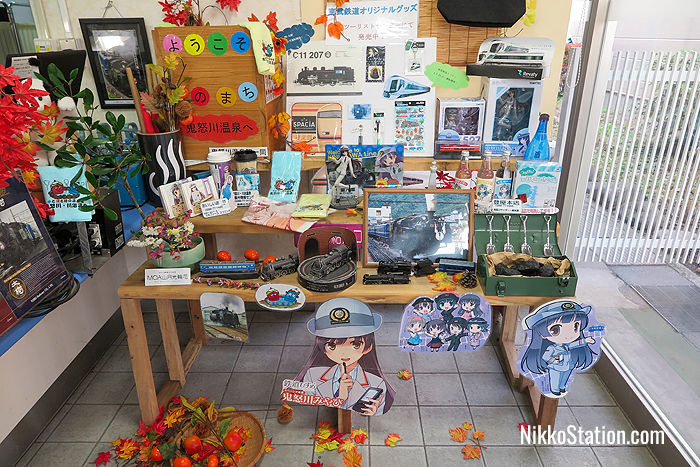 A variety of SL Taiju themed souvenirs such as model trains, badges, key rings, pens, hand towels, stationary and even SL Taiju themed sake (rice wine) are available from souvenir stalls at both the Shimo-Imaichi and Kinugawa-Onsen stations. Below is a brief introduction to the two main destinations.

This station provides immediate access to the architectural theme park of Tobu World Square. This park has over a 100 scale models of the world’s most famous buildings and structures, such as the Great Wall of China, St. Peter’s Square in Rome, the Pyramids of Egypt, and the most famous buildings in the New York City skyline. The models include 45 UNESCO World Heritage Sites, and landscapes of Japan which include working model trains such as Tobu’s famous Revaty and Spacia series of limited express trains – and of course the SL Taiju! 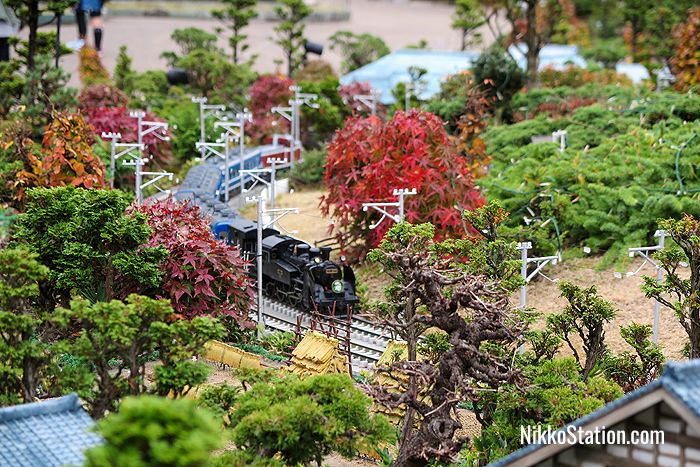 A model version of the SL Taiju at Tobu World Square

Kinugawa-Onsen is one of the most popular hot spring resorts in eastern Japan. This scenic spa town is easily reached from Tokyo via the Tobu Railway network and has many traditional hotels providing luxurious facilities in which to enjoy natural hot spring bathing. Activities in this town include taking the ropeway cable car up to the monkey park on Mount Maruyama, and boat rides on the Kinugawa River. There are also regular bus services between the station (and some hotels) to the nearby Edo Wonderland theme park which provides a journey into the past with a recreated Edo era (1603 – 1868) town with wooden buildings, actors in period costume, ninja shows, and colorful parades. The best activity though is to relax in one of Kinugawa Onsen’s outdoor baths while viewing the beautiful scenery of the deep valley gorge. 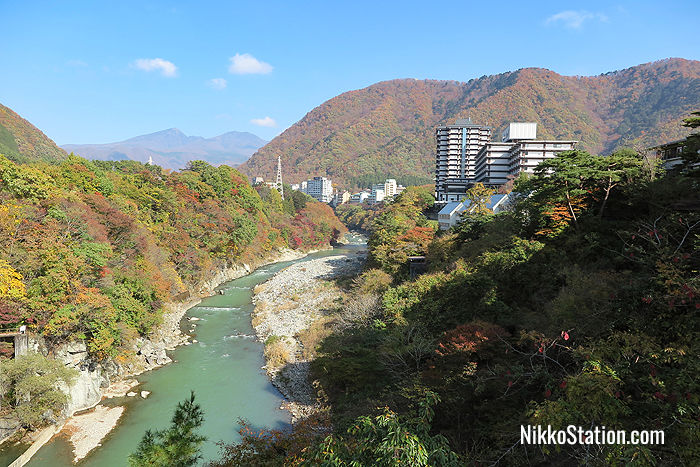 About the SL Taiju

The name “Taiju” literally means “big tree” and was a term used to refer to the Tokugawa Shogun, a military leader of Japan, whose spirit is enshrined at Nikko’s Toshogu Shrine. This name is also a reference to Tokyo Skytree which is also on the Tobu Railway network. The train actually consists of many parts which have been assembled from a variety of sources. 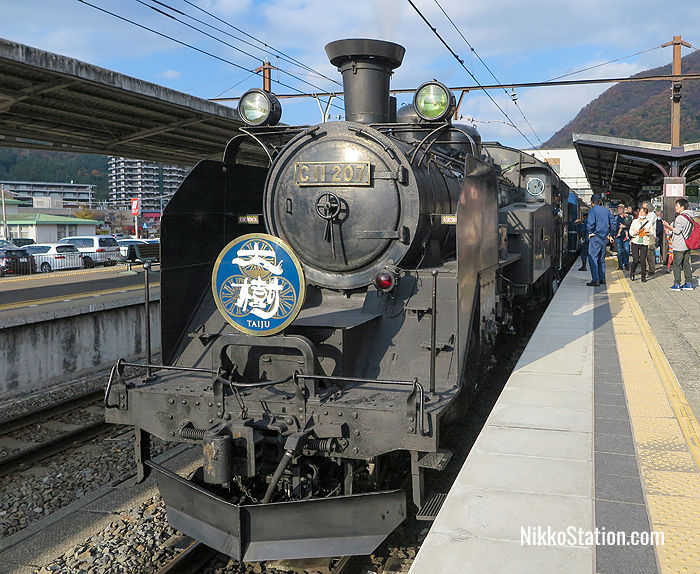 The C11 207 is unusual for having twin headlights

The steam locomotive at the front of the train is a JNR Class C11 series train. Altogether 381 of these locomotives were built in the 1930s and 1940s of which just 50 have been preserved. This locomotive is the C11 207 which was built in 1941 for Japan’s national railway. It was previously operated by JR Hokkaido and is notable for its distinctive double headlights. Nicknamed “kani-me” in Japanese which means “crab eyes”, these dual headlights were fitted to the engine because it used to run along a line in Hokkaido with extremely foggy weather conditions. 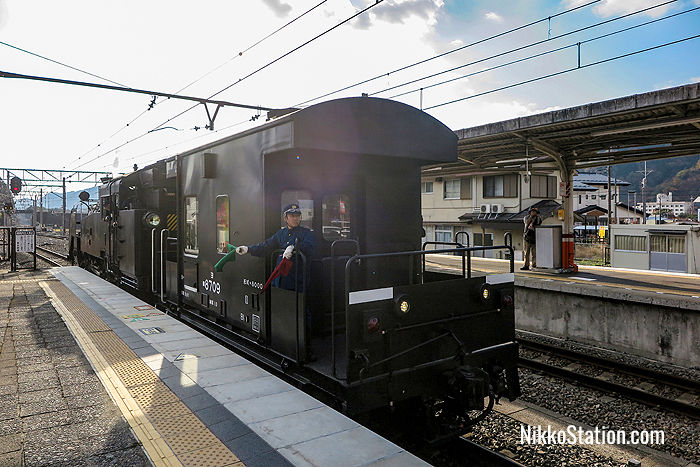 The conductor’s wagon can be seen behind the C11 207 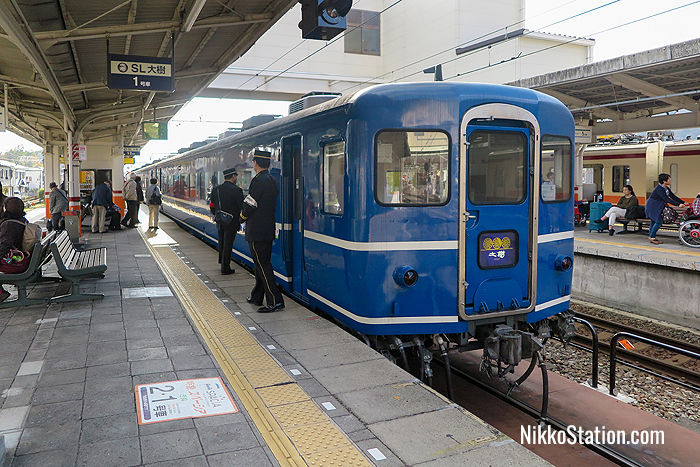 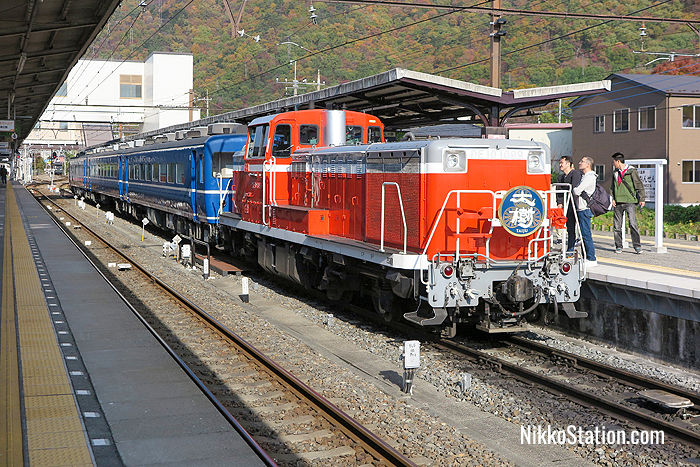 Currently, when the C11 207 is in need of maintenance, the train runs with just a diesel engine as the DL Taiju. However, there are plans to introduce a second steam locomotive: the C111 which was built in 1947. The C111 is currently being renovated and should be ready to run by the end of 2020, after which SL Taiju services will be able to continue uninterrupted all the year round. 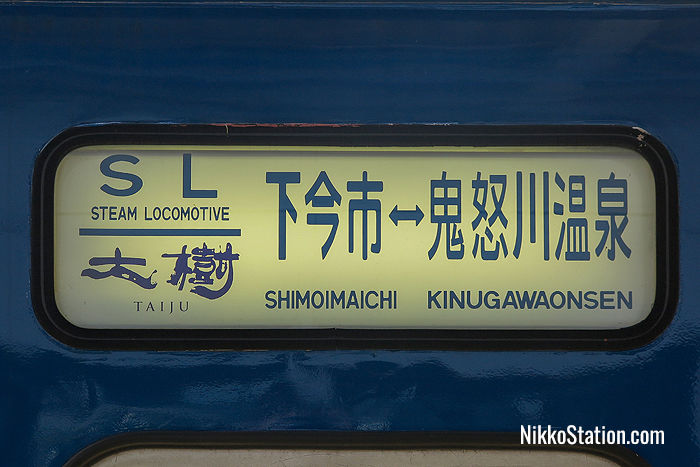 A carriage plaque on the SL Taiju

Below are the current timetables for the SL Taiju. As this schedule is subject to change, please check the official SL Taiju website (Japanese only) for updated times. 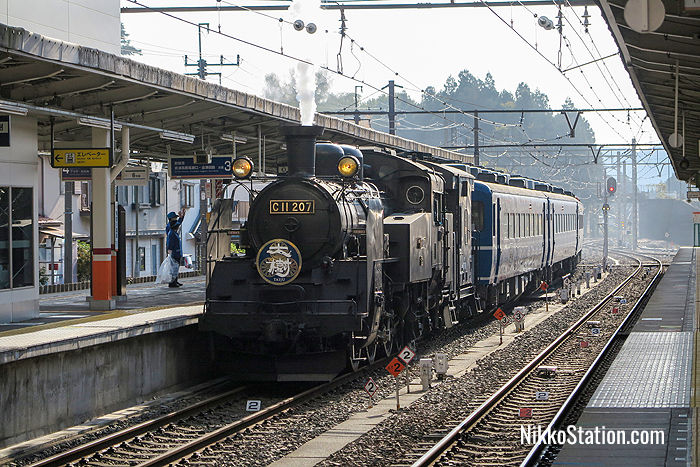 Tickets for the SL Taiju are 750 yen for adults and 380 yen for children. On days when the steam locomotive needs maintenance the train runs with just a diesel engine as the DL Taiju and fares are cheaper: 510 yen for adults and 260 yen for children. Tickets must be booked in advance and are available one month before the date of travel. Tickets can be bought at any staffed Tobu Railway station or at the Tobu Tourist Information Center on the first floor of Tobu Asakusa Station in Tokyo. Tickets can also be booked online at the official Tobu website.