The Revaty Kinu is a limited express service that runs from Shin-Fujiwara Station in Tochigi Prefecture to Tobu Asakusa Station in Tokyo. There is just one Revaty Kinu service per day which provides a return service from the popular spa resort town of Kinugawa Onsen back to Tokyo’s Asakusa district. 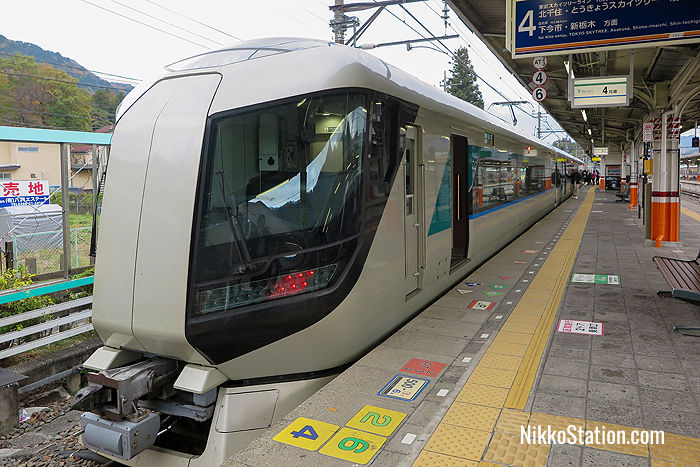 The Revaty Kinu is run by the private company, Tobu Railway, so it is not covered by the Japan Rail Pass. However, Tobu does have its own system of discount passes for international tourists. All seats on this service must be reserved in advance, and you will have to pay a limited express surcharge as well as paying for your train ticket.

The Revaty Kinu train runs independently until it reaches Shimo-Imaichi Station where it is coupled with Revaty Kegon #14. The two services then continue on together to Tobu Asakusa Station. It should be noted that this train does not stop at the architectural theme park of Tobu World Square which is served by other limited express services and by local services from Kinugawa-Onsen Station.

The key destinations and transfer points are listed below. Rail fares (including limited express surcharges) and example journey times are listed from Shin-Fujiwara Station. 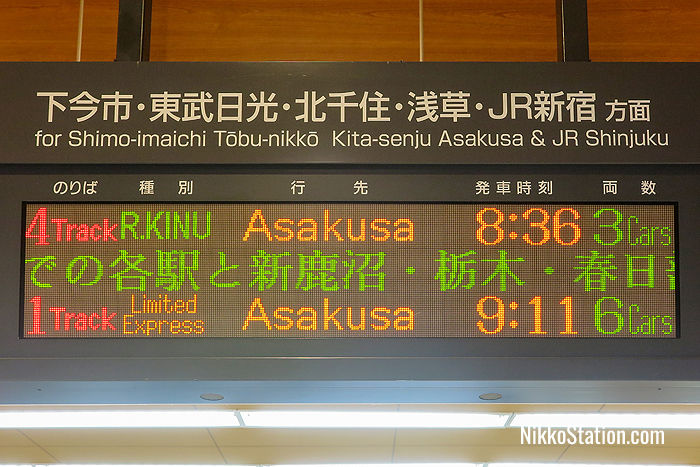 This station is located further up the Kinugawa River from Kinugawa-Onsen Station and serves the same resort area. As some hotels are located closer to this station, this may be a convenient point to board the Revaty Kinu. This station is also convenient for the outdoor bath of Kinugawa Koen Iwaburo and the doll museum of Nikko Ningyo Bijutsukan.

This is the main station for the hot spring resort town of Kinugawa Onsen. The main feature of this town is the dramatic valley gorge along which there are many traditional resort hotels. Popular activities at Kinugawa Onsen include taking boat cruises on the Kinugawa River (from April till November) and taking the Ropeway cable car to the top of Mount Maruyama where there is an observation point and a small monkey park. Kinugawa Onsen is also convenient for the Edo Wonderland amusement park which is a 15 minute bus ride away. This theme park recreates the culture, life, and architecture of Japan’s Edo era (1603 – 1868) and has attractions such as street shows, ninja workshops, seasonal festivals, and colorful parades. The architectural theme park of Tobu World Square is also just one stop from Kinugawa-Onsen Station on the Tobu Kinugawa Line.

This station is the southern terminus of the Tobu Kinugawa Line. Transfers can be made here to the Tobu Nikko Line for services bound for Nikko.

Tochigi City’s main sightseeing area is the Kuranomachi district which has many fine old wooden buildings. Top attractions in Tochigi include the Tochigi Kuranomachi Museum of Art, the Tochigi Utamaro Museum which displays ukiyo-e prints by the artist Kitagawa Utamaro, and the Okada Memorial Museum which is a historic residence with many historic artifacts on display.

Kita-Senju is the transfer point for the JR Joban Line, Tokyo Metro’s Chiyoda and Hibiya lines, and the Tsukuba Express.

This station serves the broadcasting tower and popular sightseeing spot of Tokyo Skytree. Tokyo Skytree stands 634 meters high and is the world’s tallest tower. On its upper levels there are observation decks from which you can enjoy spectacular views over Tokyo. The tower also contains many souvenir shops and dining facilities, and there is a large commercial complex around it which includes shops, restaurants and an aquarium.

Asakusa is a major sightseeing area in Tokyo with attractions such as the ancient Sensoji Temple, the dramatic Kaminarimon Gate, the retro fairground rides of Hanayashiki amusement park, the cheap and casual downtown pubs of Hoppy Street, and the traditional souvenir stalls of Nakamise. Transfers can be made in Asakusa to Toei Asakusa Subway Line, Tokyo Metro Ginza Line, and the Tsukuba Express Line.

The Revaty Kinu makes one inbound journey to Asakusa in Tokyo each day. The times for the main boarding points and destinations are listed below.

There are no outbound Revaty Kinu services, but other Tobu Railway services such as the Revaty Aizu and Spacia Kinu also run both ways along this route. 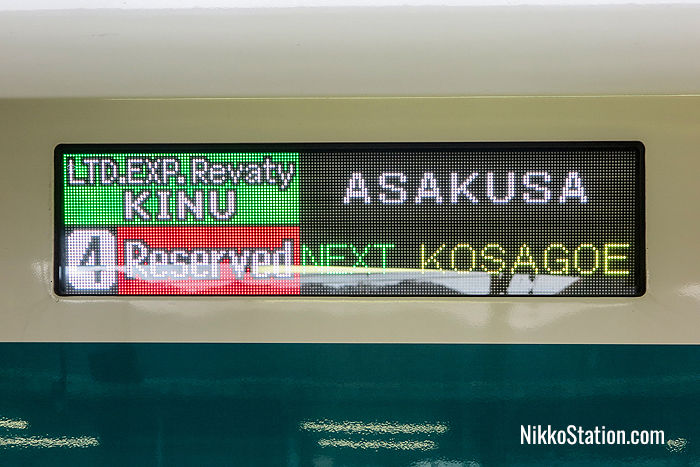 A carriage banner on the Revaty Kinu

The Revaty Kinu is a three-car Tobu #500 series train with 161 seats. The train is completely non-smoking. Cars are lit with LED lighting and each seat has its own power outlet. Wi-Fi is available throughout the train. There are spaces for wheelchairs and washrooms accessible for wheelchair users. Food and drink are not served on board this train, so passengers are advised to buy snacks, meals, and refreshments before the journey.

Alternatives to the Revaty Kinu

Because Tobu Railway is a private company its lines are not covered by the Japan Rail Pass. However, Tobu does have its own system of discount passes for international tourists. Special passes are offered that offer discounts for the Kinugawa Onsen and Nikko areas and the journey between Kinugawa Onsen and Asakusa. To find out more please visit the official Tobu Railway website.